Did you accidentally hit a deer in your car? If the animal is suffering, you could use a ‘coup de grace’ to put it out of its misery. This post unpacks the meaning and origin of this expression.

The expression ‘coup de grace’ means a death blow dealt to a person or animal out of mercy for their situation. For instance, if you hit an animal on the road and there is no chance of saving it, you could issue a ‘coup de grace’ (death blow) to put a swift end to its suffering.

The original form of the saying is ‘coup de grâce.’ However, the modern use of the word in English doesn’t require the use of a circumflex, resulting in ‘coup de grace.’ The term translates from French to ‘blow of mercy’ or ‘stroke of grace.’

The term can also refer to someone’s style leading to an outstanding or remarkable finishing move. An example would be someone taking a three-point shot and winning the game at the buzzer.

“I was driving home and ran into a deer on the road. The poor thing was beyond saving, so I had to shoot it. Better to give it a coup de grace rather than let it suffer.”

“The strong dollar could be the coup de grace for financial markets, throwing fuel on the inflationary fire. Could this be the end of the global economy?”

“The coup de grace came to the markets as commodity prices moved higher after the massive stimulus launched by the Federal Reserve.”

“The coup de grace to the Biden administration will be how he handles the economy. He has no clue what he’s doing, and it will cause a financial disaster the likes of which we’ve never seen in history.”

“The rising interest rate was the coup de grace to the property deal. The new buyer couldn’t afford the mortgage at those rates.”

“It seems like the coup de grace will come from the firm that decides to buy out the company, replacing the management with a fresh team.”

“The coup de grace for the Sonics was when LeBron scored that buzzer beater, pushing them out of the playoffs.” 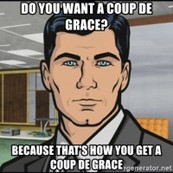 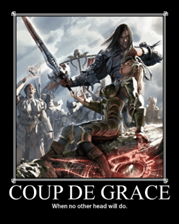 The expression ‘coup de grace’ originates from French. The phrase first appeared in English towards the end of the 17th century. The term originally referred to mercy killing or euthanizing a sick or injured animal to put it out of its misery.

In some instances, you could use coup de grace to describe the execution of a convicted criminal. Over the decades, ‘coup de grace’ would refer to an event or act putting a definite end to it.

Language experts cannot pinpoint when the term entered the English lexicon or who coined its use in English.

Phrases Opposite to Coup de Grace

Many people confuse ‘coup de grace’ with ‘coup d’état,’ meaning a hostile overtaking of the government by its military forces. However, the two phrases have separate meanings, and ‘coup de grace’ refers to a final killing blow, usually done out of mercy.

You can use the expression ‘coup de grace’ to describe a killing blow or final shot that ends an engagement with an opposing party. The phrase describes a kill shot to people and animals, usually referring to a death blow that delivers solace and peace to the person. It’s similar to using the word ‘euthanize’ when referring to putting animals out of their misery.

The phrase can refer to physical blows or harsh words. For instance, you could collide with a deer in your vehicle, severely injuring the animal. You could shoot it to put it out of its misery, using a ‘coup de grace.’ Or you could call getting in the final word that kills a conversation a ‘coup de grace.’