Are you looking for a motivating statement to tell someone to give it all they got? You can use the saying “go for broke” to tell them to throw caution to the wind in the hope of a big win. This post unpacks the meaning and origin of this expression.

If you “go for broke,” it means that you will give your best effort to a task without the fear of risk or failure holding back your performance. The saying implies that there is a lot on the line or at stake for the person, and they need to succeed at all costs.

Typically, it’s a motivating statement to entice another person into reckless behavior where they place themselves in harm’s way.

If they experience an adverse outcome they don’t expect, it could ruin them. It’s a similar expression to “swing for the fences.” However, “to “go for broke” implies more at stake, possibly a monetary value.

“It’s now or never, Mike; it’s time to go for broke and give it everything you’ve got. There’s no chance we can win this unless you hit a home run.”

“I’m going to go for broke and try my luck with speaking to that guy at the bar. He’s gorgeous, and I wonder if he’s single?”

“It’s time to go for broke. This is our last chance, and if we don’t pull it off, the whole of humanity is at risk of the repercussions.”

“Let’s make a difference and really go for broke with this project. If we fall short, at least we can say we tried.”

“I saw that guy go for broke taking that jump. He knew he wouldn’t make it, but he tried anyway. I gotta hand it to him. He’s got skills.” 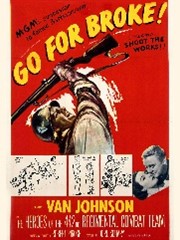 The expression “go for broke” originates from the Hawaiian street game, Pidgin craps. During a game, players would bet everything they had on a single roll of the dice. It’s similar to the technique of “going all in” in poker. When a player bets all their chips, the other players would say he was “going for broke.”

Another possible origins story for this expression comes from the 1951 film of the same title. “Go for Broke!” was an action movie and a fairly big success at the box office. However, the phrase was in use before the film’s release.

“…decided to do things properly, and their favorite contractor was told to go for broke, as the saying is, and to do the place over from caves to the basement.”

Phrases Similar to Go for Broke

Phrases Opposite to Go for Broke

The phrase doesn’t mean that a person should intend to make themselves go broke or lose all their money. It’s a way of telling someone to abandon their risk-averse stance and give it everything they have to achieve the outcome they want.

You can use the phrase “go for broke” as a motivating statement to inspire others to up their performance. By telling someone to “go for broke,” you ask them to throw caution to the wind and take more risks in the situation. It’s another way of telling people to “swing for the fences.”

The phrase suits social and professional use. You can use it at the office to tell a colleague to “go for broke” with their sales pitch. Or you could use it with your friends when they tell you they’re going to go over to the bar and talk to someone they find attractive.