Did someone tell you that your trading card collection is in “mint condition,” and it’s worth a fortune? This post unpacks the origin and meaning of this idiomatic phrase.

The phrase “mint condition” means that an object is in brand new condition, as it was on the day of its manufacture. It’s common to see this phrase appear on retail websites, such as eBay, where people are selling used goods. The owner will state that the product is in “mint condition” when trying to impress that it is in immaculate shape.

Many old collectibles, like coins, comic books, and trading cards, go through a process of “grading,” where they undergo a professional assessment of the article’s condition. If the grading company views something as in “mint condition,” they award it with the highest grading possible, increasing its value to the top end of the market pricing.

“Mint condition” can refer to items that are “mint” or “near-mint,” meaning they look almost as good as they did on the day of manufacturing. Collectors will only consider items in mint condition, as they hold the highest trading value on the open market.

Therefore, if you’re telling someone that a product or item is in mint condition, you’re telling them that they will struggle to find it in this type of shape anywhere else. Typically, the phrase only applies to pre-owned goods and not to items that are new.

“I have a 2019 Lebron trading card that’s in mint condition, graded a ten by the NGC.”

“That 68′ Pontiac is in mint condition. It’s over a half a century old, but it looks like it just rolled off the assembly line.”

“Clive collects coins, and he just found an Indian head penny in mint condition; he’s going to get a great price for it on the market.”

“I don’t mind buying pre-owned clothes, as long as they are in mint condition.”

“That Rolex is in mint condition. I bet you get more than what you paid for it when you take it to the jeweler.” 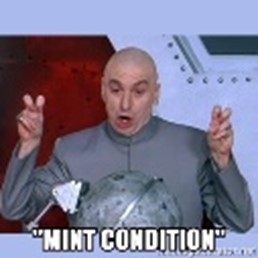 The first recorded use of “mint condition” appears in the 1540s. The phrase derives from the Latin, “monetarius.” The idiom gained popularity among workers in coin production facilities, otherwise known as “mints.”

As a result, something in “mint condition” means that it just rolled off the production line, and the coin is yet to move into the circulating money supply. The term’s first appearance features in the Evening Telegraph, a British newspaper, in 1895.

By 1920, people started to change the idiom’s meaning, using it to describe pre-owned goods in good condition. Iris Murdoch penned the term in her 1956 novel, “The Flight From the Enchanter,” where she writes, “the books were chaotic but in mint condition.”

Phrases Opposite to Mint Condition

Some people may use the phrase to describe objects or products in good condition, but not mint. If something is in mint condition, it is in the same state as originally produced. The phrase has nothing to do with the plant, mint. It refers to the condition of the item.

You can use “mint condition” when you’re describing the current status of an object compared to how it rolled off the manufacturing line. The phrase is common when describing vehicles, comic books, trading cards, and other everyday items in life. Mint condition gives the impression that the object is in the same state as its original manufacture.