Are you looking for a way to tell someone that you arrived home without incident? You could use “safe and sound” to put their mind at rest. This post unpacks the meaning and origin of this expression.

If you are “safe and sound,” it means that you arrived at a destination without incident or are positioned in a secure and comfortable space. The phrase can also refer to being whole or undamaged, meaning that you didn’t sustain any incident that ruined your physical integrity.

The saying can apply to people or objects. For instance, your family could be safe and sound at home after returning from a vacation. Or the Rolex watches are safe and sound after securing them in the vault.

“Everyone got home safe and sound. There’s no need to send out the search party for us. Thanks for calling. We appreciate it.”

“We packed the jewelry into the vault where it’s safe and sound. Now we just polish the display counters, and then it’s time to go home.”

“The kids are home from camp safe and sound. They had a long bus ride and went straight to bed because they felt tired.”

“We’re all back from vacation safe and sound; it’s good to see you again. Come past for a chat, and we’ll show you the photos.”

“We’re at the destination safe and sound. We have the prisoner in custody, and we’re heading to the court right now.”

“Everything worked out, and we’re safe and sound. I wouldn’t have thought that an hour ago when our lives were at risk.”

“Everything is safe and sound on the home front right now. The kids are asleep, and I’ve got the alarm company on standby if anything goes wrong.”

“I just want that feeling of being safe and sound right now. There is so much going on in this chaos, and I’ve never felt more at risk ever in my life.”

“We made it home safe and sound, even though there was that mudslide on the way here.” 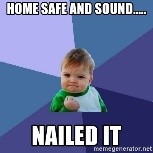 The expression “safe and sound” originates from the Shakespeare play, The Comedy of Errors,” performed in 1594. The play has a line in act 4, scene 4, that reads as follows.

“Fetch our stuff from thence: I long that we were safe and sound aboard.”

We can find further examples of the use of the expression in “The Scholemaster,” where it appears in the following archaic language.

“Who by his wisedome and honestie, by his example and authority, may be able to kepe them safe and sound, in the feare of God…”

Phrases Similar to Safe and Sound

Phrases Opposite to Safe and Sound

You can use the expression “safe and sound” when telling someone that you arrive home without any trouble. It’s a way of telling people that you had an uneventful trip. Or it can act as a way to tell someone that you are currently safe and there is no threat against you.