Are you looking for a way to tell everyone you will get dressed for a meeting? You could say it’s time to get “suited and booted” and ready for action. This post unpacks the meaning and origin of this expression.

Being suited and booted is another way of saying “suited up” or “Sunday best.” It means that you’re wearing your best formal attire to impress people. The phrase can apply to dressing in a suit off the rack or a tailored suit.

“We’re about to get suited and booted to go to the wedding, are you guys there already? Who ordered the corsages?”

“We have the meeting at 4pm. That gives us just enough time to get back to the hotel to get suited and booted and ready for the shareholders.”

“Let’s get suited and booted and head on over to the sales conference. We need to look good for appearances. There might be a client attending.”

“It’s time to get suited and booted and ready for the big show. I bought a brand new Hugo Boss suit for the occasion, and I can’t wait to put it on.”

“When it comes to getting suited and booted, you guys do it right. You have the best fit. Who is your tailor? I must know.”

Let’s get suited and booted and head to the meeting. Don’t forget your business cards, and remember to charge your phone before we leave.” 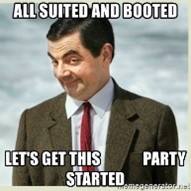 The expression “suited and booted” originates from the British. It appeared around the 1600s, during the British conquest of the East. It was a common saying in the military officer ranks. They would get suited and booted to attend meetings with the top brass.

There is no official record of when the phrase first appeared in English or its first use in print. However, it remains a common saying in modern times. Many business people use it to describe dressing up for their job or a work-related event.

Phrases Similar to Suited and Booted

Phrases Opposite to Suited and Booted

The phrase describes dressing in suits and boots. Using it to describe any other dress code is incorrect. Wearing a sports coat or blazer and jeans with boots wouldn’t qualify for the saying.

You can use the saying “suited and booted” to describe dressing formally in a suit and dress shoes or boots. It’s a way of saying that you’re putting on your best clothing for a formal engagement. You could use it to describe the dress code for a formal event like a meet and greet or a sales conference where everyone dresses to a standard.