Are you looking for a phrase to describe an unoccupied commercial property sitting idle doing nothing? If so, you could call it a “white elephant.” This post unpacks the meaning and origin of this expression.

The expression “white elephant” means a piece of commercial real estate that no longer has any value and generates no cash flow. It sits dormant, doing nothing to add value to investors’ portfolios.

It can also refer to construction projects, like soccer stadiums, built for a one-off purpose. Typically, these construction deals are filed with corrupt partners that benefit from the project financially.

The phrase can also apply to any doomed company, organization, or business losing money. Some people may also use the term to describe a money-laundering front. The phrase means that the business or building is defunct and no longer has any commercial purpose.

“You see that building over there? It’s a white elephant. There are no tenants inside, and the mall management went bust a year ago.”

“That property is a white elephant. It earns no income, and it’s just costing us more in debt payments than its worth.”

“That soccer stadium the government built for the World Cup turned out to be a white elephant. As soon as the tournament finished, it went dead quiet.”

“The building in town is a white elephant. It’s had no management for the last year, and homeless people took over the empty flats.”

“Your property portfolio consists of nothing but white elephants. All these retail locations are down big for the year, and they aren’t going to survive.”

“In this economy, it’s surprising that there aren’t more white elephant properties in portfolio managers’ assets.” 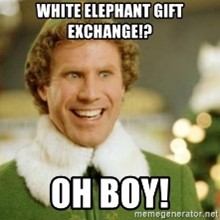 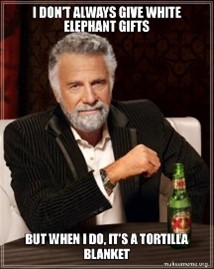 Asian countries like Thailand and India view the albino elephant as a spiritual deity, holding it in the highest regard in their society. These animals have people that worship them, and owners must provide the elephant with a lifestyle other animals can only dream of attaining.

As a result, it became a burden for people to own white elephants. If the king felt he wanted to punish one of his subjects, he would present them with a white elephant to care for, ruining their finances. The earliest reference to white elephants in Thailand traces back to the 17th century.

However, the first instance of it being used in the same framing as the modern saying comes from G. E. Jewbury’s Letters, published in 1892, where it appears as follows.

“His services are like so many white elephants, of which nobody can make use, yet that drain one’s gratitude if indeed one does not feel bankrupt.”

Phrases Opposite to White Elephant

The phrase has nothing to do with elephants or albino elephants. The elephant is a highly prized animal in India, and the albino version has a god-like status in many cultures. They would stand around doing nothing but eat all day, which is where we get the similarity. Therefore, using the expression to refer to elephants is incorrect.

You can use the expression “white elephant” to describe a property, building, or structure built for a specific purpose and then abandoned shortly afterward. The property usually cost a fortune and was in some way connected to corruption or bad planning. Typically, investors that pour money into a “white elephant” will lose all of their money as it provides no cash flow.

The phrase is suitable for professional use, and you’ll hear it occasionally in business-speak. Someone may refer to a shopping mall that closed a few years after opening as a “white elephant. Or the closure of the streaming service CNN+ a month after its launch would be considered a white elephant and a failure.