Are you looking for a way to tell someone to stop obsessing over future events? You can use the saying “a watched pot never boils” to get them to take their mind off it and pass the time. This post unpacks the meaning and origin of this expression.

The expression “a watched pot never boils” means that focusing on something arriving in your life makes it take longer to manifest. It means that time somehow slows down when we think about something continuously during the day, making the wait for it seem longer.

It’s a similar concept to Einstein’s “Theory of Relativity.” The idea is that time moves at different speeds relative to the observer’s experience in their life. That’s why we can react in seconds to something, but it feels like minutes – like holding your breath underwater.

So, by telling someone that a watched pot never boils, you’re telling them to take their mind off their desires and focus on something else to fill the time.

“I told you to stop thinking about the summer all the time. It will get here when it gets here. A watched pot never boils.”

“Man, it feels like the weekend is never going to arrive, it’s only Wednesday, and it feels like it should be Friday. I need to put the calendar away. A watched pot never boils.”

“I hear you. There’s no point obsessing over the vacation now. It’s months away. A watched pot never boils, and you’ll just make it feel longer till we leave.”

“A watched pot never boils. So, stop thinking about your birthday all the time, or it will never get here.”

“I know you’re excited about going to camp in the summer, but it’s still weeks away. Focus on your classwork, and the time will go by faster.”

“College is only a few weeks away, but it feels like it’s taking forever. A watched pot never boils, so I suppose I should take my mind off it for a while.” 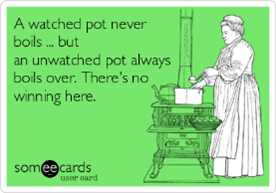 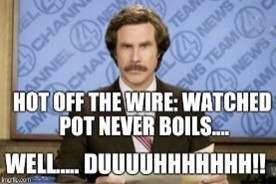 Benjamin Franklin coined the phrase “a watched pot never boils.” The American legend wrote an iteration of the saying in a report published in 1785, where it reads as follows.

The earliest rendition of the modern version of the saying appears in the newspaper “Cobbett’s Political Register,” Volume 14, published in 1808, where it reads as follows.

“If I had a laborer, who was to become a notorious drunkard, I would dismiss him, because it would be my duty strongly to shew my disapprobation of so beastly a vice; but, after a good deal of observation, I am thoroughly convinced, that, as a ‘watched pot never boils,’ so a watched penny never breeds.”

Phrases Opposite to A Watched Pot Never Boils

The phrase has nothing to do with boiling water or kettles. The kettle in the saying is the object of your desire, and “boiling” the water is the journey to that future event. The phrase doesn’t mean watching a kettle will prevent it from boiling.

You can use the phrase, “a watched pot never boils,” when you’re trying to tell someone to stop obsessing over future events. It’s a way of telling them that focusing on future events won’t make them come any sooner.