Are you looking for a way to tell someone they are trying to complete a futile task? If so, you could ask them to stop “beating a dead horse.” This post unpacks the meaning and origin of this expression.

The expression “beat a dead horse” means that your actions on a task are fruitless and provide no progress to achieving a result.

It’s a way of telling someone to change their behavior or take a new approach to problem-solving. It’s also a way to say to people that you are tired of hearing them discuss the same topics repeatedly.

“Gosh, I’m tired of hearing you bring that up time and time again. Don’t you ever get tired of beating a dead horse?”

“There’s Mike going on about how we all need to chip in to save the environment. Man, that guy will never stop beating a dead horse, and no one listens to him.”

“I feel like I’m beating a dead horse with this. No matter what I do, it doesn’t change anything, and I’m starting to get really frustrated with everything.”

“The manager keeps on beating a dead horse about us following procedure. It’s somewhat annoying to hear him drone on about it every day when we all comply with the procedures anyway.” 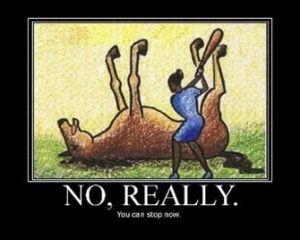 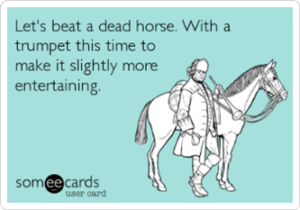 The origin of the expression “beat a dead horse” comes from the original phrase, “flogging a dead horse.” However, modern language no longer uses the word “flogging” to describe a beating, hence the change in the phrase.

The original phrase “flogging a dead horse” appears in the 1600s in the Richard Brome play “The Antipodes,” performed in 1638 and published in 1640.

“He cur’d a country gentleman that fell mad

For spending of his land before he sold it;

That is, ’twas sold to pay his debts – all went

That way for a dead horse, as one would say!”

The modern version, “beating a dead horse,” first appeared in print in 1859. It comes from a report referencing a UK parliamentary debate between Lord Elcho, the Sixth Earl of March, and Francis Wemyss-Charteris Douglas, The Eighth Earl of Wemyss.

It features in Volume 153. 1859 of Hansard’s parliamentary debates, as follows.

“If the hon. Member for Birmingham [John Bright] had been present, he would have asked the hon. Gentleman [Lord Elcho] whether he was satisfied with the results of his winter campaign. It was notorious that he was not, and a saying was attributed to him that he found he was “flogging a dead horse.”

Phrases Opposite to Beating a Dead Horse

The phrase has nothing to do with the violent action of beating something. It refers to a person persisting at a task, even though they won’t receive a different outcome.

At home, you could tell your partner to stop moaning at you about a previous event that’s out of their control and no longer matters in their life.

The phrase suits situations where you’re trying to tell someone that they are spending time and energy pursuing something that offers them no value in their life.