Are you looking for a phrase to describe two best friends that are always together? If so, you could say they are “two peas in a pod.” This post unpacks the meaning and origin of this expression.

The meaning of “two peas in a pod” refers to two people sharing like-minded ideas. They also spend a lot of time together, and you’ll rarely see them apart. The saying usually applies to best friends who enjoy hanging around each other.

However, the saying can also refer to twins that are always together, family members, or relations. The expression means that the pair share the same ideals, behavior, and interests. They back each other up on everything, and they hold a consensus on their beliefs.

Two peas in a pod refer to two people that are “on the same page” and enjoy each other’s company. Trying to separate them will cause the pair pain and strife if they can’t hang around with each other.

“Look at Jim and John, those two are always around each other, and you never see them alone. They’re like two peas in a pod.”

“Jessie’s twins look so cute in that double stroller. They look like two peas in a pod.”

“Our dogs hang around with each other all day. They play on the farm and even mess around with the cows. They’re like two peas in a pod.”

“Sandra and Samantha are best friends, they’re two peas in a pod, and they are inseparable.”

“Simon and Chad are close as brothers. They don’t have any sibling rivalry; it’s like they’re two peas in a pod.”

“Tiffany and Sylvie are like two peas in a pod. They share everything, and I always see them together wherever they go.” 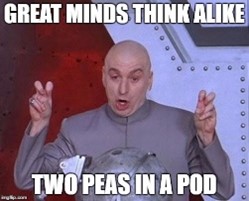 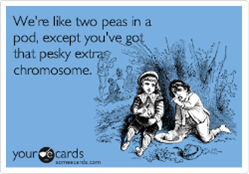 The origin of the expression “two peas in a pod” comes from the early 1800s. Author Catherine G. Ward published a book called “The Widow’s Choice, or, One, Two, Three,” in 1823, where it appears as follows.

“Nay, I have actually heard Miss Liddy say that the eyes of Lady Primose, which are of a charming bright black, you know, and the nose of Lady Primrose, which inclines rather to the aquiline, is as like yours, when you was a young man, as two peas in a pod.”

This saying appeared in many newspaper articles during this period.

The Sydney Gazette and New South Wales Advertiser published a piece in 1834 that reads as follows.

“There never were two peas in a pod more alike than Signor Joachim Fernando Pereira, and my late servant, John Taylor the deserter.”

Phrases Similar to Two Peas in a Pod

Phrases Opposite to Two Peas in a Pod

Ways People May Say Two Peas in a Pod Incorrectly

The saying doesn’t have anything to do with peas or vegetables. Using the term to refer to animals wouldn’t be the correct use of the phrase. It refers to two people that have a close relationship with each other.

Acceptable Ways to Phrase Two Peas in a Pod

You can use the phrase “two peas in a pod” in social situations where you describe how people have similar characteristics.

The term usually refers to best friends who are always hanging around each other. They seem inseparable, and they have a like-minded approach to life. This saying could apply to professional language, but it’s more common in social speech.