Are you sitting around a table with some friends enjoying a cup of coffee? One of them suddenly turns to you and says, “So, start spilling the tea on everything you know about Joan and Joe’s breakup.”

This post unpacks everything you need to know about the origin and meaning of this phrase.

The meaning of the idiomatic phrase, “spilling the tea,” refers to the act of telling the truth. It comes from a drag queen culture and has a slightly different meaning to the word “truth” In drag culture, spilling the “T” refers to letting people in on the gossip.

So, when you’re “Spilling the tea,” you’re telling people secrets or gossip about other people that you should be keeping to yourself. Typically, the phrase is a casual greeting to people, but you can also use it when you think that someone is hiding something from you.

Spilling the tea doesn’t have any reference to spilling the beverage tea. It’s a colloquial saying, and it usually happens between females or drag queens looking to get into a conversation with their girlfriends.

Gloria: “Did you hear about Greg and Lucy? They broke up on the weekend.”

Karen: “Gloria is always spilling the tea about other people’s business.”

Denise: “Let’s ask Gloria or Sharon about hats going on with Lucy and Greg.? 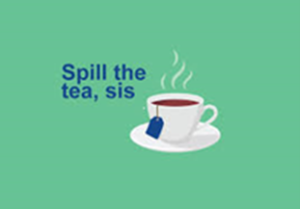 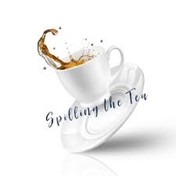 The phrase “spilling the tea” comes from the 1994 novel “Midnight in the Garden of Good and Evil” by John Berendt. In the book, the character of drag queen Lady Chablis uses the phrase in the context of “spill the T.”

While the T in the line might sound like “tea,” the beverage, it’s an abbreviation of the word “Truth.” The context in the book is asking the truth in a somewhat serious manner. However, the use of the phrase would continue, with many people using it in a lighthearted manner to describe gossip, not truth.

As drag culture gained popularity in mainstream culture, so did many of its sayings. Spill the tea is another example of how this language “spilled” over into general use. Today, people of all gender identities use the term to get people to tell them the latest gossip.

The phrase “spill the tea” appears in many media formats in popular culture. From “RuPaul’s Drag Race” Harlequin romance novels, spill the tea is a common phrase with plenty of use cases.

Phrases Similar to Spilling the Tea

Phrases Opposite to Spilling the Tea

To spill the tea doesn’t have anything to do with spilling beverages. The “tea” in the phrase refers to hidden knowledge or gossip held by someone else. So spilling the tea would only apply to situations where you’re trying to pry information from another person.

You can use “spilling the tea” when you’re trying to convince someone to tell you a secret or the truth. It’s a gossiping term that’s a polite way of prying. “Spilling the Tea” means you’re asking someone to give you insider information, and you can use it in professional and social circumstances. For instance, you could ask a co-worker to spill the tea on the relationship status of a colleague. Or you could ask them to spill the tea on what’s going on with someone’s life in your social group.