Are you trying to convince someone that you’re not responsible for something? If you’re being overly dramatic with your denial, the other person might say “a hit dog will holler,” but what do they mean?

This post looks at the meaning and origin of this expression.

A Hit Dog Will Holler Meaning

The meaning of the saying, “a hit dog will holler,” is to imply that the person speaking out loudest against an accusation is usually the culprit responsible for the transgression. It’s common to see this behavior in children that know they have done something wrong.

Kids will vehemently protest that they are not the party responsible for the issue. However, they have little experience with how people behave in this instance, and they don’t realize that they are making themselves look guilty by vocally challenging the accusation.

Kim: “I can’t believe you would think I would cheat on you with your best friend. He was only here to say hi, and we spent a few hours talking; nothing happened.”

Chad: “A hit dog will holler. You’re protesting it too much, and you sound suspicious.”

Mark: “Why would anyone do that? Don’t you trust me?”

Rowan: “You know what they say; a hit dog will holler. You’re looking pretty guilty in my eyes right now.”

Employee: “I swear it wasn’t me, boss, I know I was around, but it must have been someone else.”

Boss: “Well, that makes you look even more guilty. Don’t you know a hit dog will holler?” 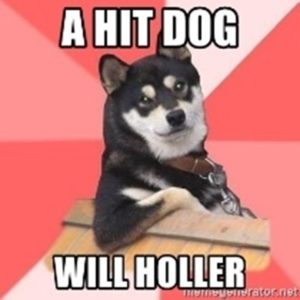 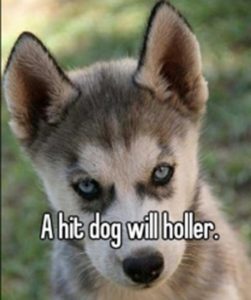 A Hit Dog Will Holler Origin

The origin of “a hit dog will holler” comes from the play “Hamlet” by the legendary William Shakespeare. In the play, Shakespeare uses the line, “The lady doth protest too much, methinks.”

While this isn’t the exact reference of the phrase, it carries the same meaning. Hamlet states that the lady’s persistent protest of Hamlet’s allegations against her makes her seem suspicious.

In the late 1880s, The Washington Post published the phrase in its entirety as “a hit dog will holler,” referencing Samuel Porter Jones, a lawyer-turned preacher. Jones would coin the proverb,

“throw a stone into a crowd of dogs, and the hit dog will holler.”

In other words, if you were to accuse several people, the culprit is likely to protest to sidetrack you into thinking that they are not the miscreant responsible.

To “throw a stone” refers to making an allegation or accusation, “hit the dog” would refer to the person who feels the accusation was to them specifically. The saying would go through changes that saw it shorten to the current format of “a hit dog will holler.”

Phrases Similar to A Hit Dog Will Holler

Phrases Opposite to A Hit Dog Will Holler

Ways People May Say A Hit Dog Will Holler Incorrectly

Acceptable Ways to Phrase A Hit Dog Will Holler

You can use the phrase, “a hit dog will holler,” when you’re trying to tell someone that you think they are the culprit of whatever they are complaining about. The phrase suits use in professional and social settings. Essentially, you’re telling someone that’s refusing to admit to something when you suspect they are the culprit and attempting to hide their involvement.