Did a friend arrive at your house in a flurry of disgust? As you ask them what is wrong, they tell you that your neighborhood is “going to the dogs.” What are they talking about? Do they mean that there are packs of wild dogs roaming the streets?

Going to the Dogs Meaning

If someone tells you that your neighborhood is “going to the dogs,” they mean that the social conditions around the area are declining. For instance, there could be homeless encampments or open-air drug markets in the area. Or, there could be trash everywhere and little sign of basic services.

Typically, the phrase means to become worse in character or quality when referring to people. It could also refer to someone, like a salesperson, who lets their figures slip, resulting in poorer performance than they had in the past.

The phrase can also refer to a decline in health, as in “my health is going to the dogs.” Or it could refer to the ruin of physical attributes, such as your looks.

Going to the Dogs Example Usage

“have you walked around the neighborhood lately? It’s really going to the dogs with all the homelessness and the tent cities popping up everywhere.”

“Did you hear that El Salvador is using Bitcoin for legal tender? That country’s financial system is going to the dogs, and they want crypto to save it.”

“The car was great for the first few months, but now the engine is going to the dogs; I should have checked the service record before buying it.”

“Did you see that influencer’s audience collapse after she admitted to lying? Man, her career is really going to the dogs.” 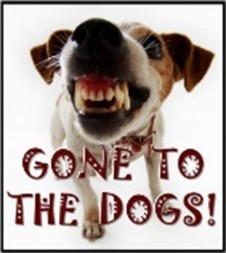 Going to the Dogs Origin

The origin of “going to the dogs” traces back to as far as the 1500s. The original use of the phrase was to describe old or stale food not suitable for human consumption. As a result, the owner would throw the stale food to their dog for nourishment.

Dogs are not very fussy eaters, and most breeds don’t have a problem eating old food and leftovers. In the 1500s, there was no such thing as “dog food,” and the owner would toss their table scraps to their dogs for sustenance.

Over the centuries, the phrase would evolve to include any person or thing devolving into a poor state of well-being or ruin. For instance, you could use the term to describe a decaying city or a person experiencing a deterioration in their health.

Phrases Similar to Going to the Dogs

Phrases Opposite to Going to the Dogs

Ways People May Say Going to the Dogs Incorrectly

Some people may use the phrase to describe the act of going to the dog track. While this was the original form and meaning of the term, it changed over time to mean a decline in standards. Therefore, using it to describe dogs and dog tracks or races is the incorrect use of the term.

Acceptable Ways to Phrase Going to the Dogs