Did you just receive a gift, and it wasn’t what you were expecting? If so, “don’t look a gift horse in the mouth,” just thank them for it.

This post unpacks the origin and meaning of this idiomatic phrase.

The meaning of “don’t look a gift horse in the mouth” is to show gratitude when you receive a gift, rather than inspecting it to see if it’s what you want. When we receive a gift from someone, we’re entitled to thank them for their effort.

If you turn around to the person and tell them that the gift isn’t what you wanted, they are likely to feel offended, and that’s the last time they’ll ever gift you anything.

“I got a tax rebate far beyond what I thought the IRS was going to send me. Well, I guess it’s best not to look a gift horse in the mouth.”

“Kelly and her husband fell pregnant after the doctor said she would never be able to conceive. They can’t understand why, but I told them, don’t look a gift horse in the mouth.” 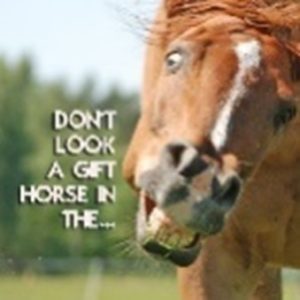 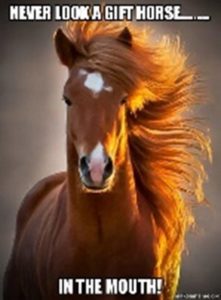 The phrase “don’t look a gift horse in the mouth” comes from the mid-1500s. At the time, horses were a valued commodity and the means of transport and logistics. Buying a horse was the equivalent of buying a car today, requiring the prospective owner to inspect the animal before agreeing to the sale.

To guess the horse’s age and health, the prospective buyer would look at the animal’s teeth. As horses age, their gum line starts to recede, making their teeth appear longer, which is where we also get the phrase “long in the tooth.”

When the horse got older, the owner would either put it out to pasture or sell it to a processing factory for little money. As a result, many owners would give their horse away when it got old to avoid housing and feed expenses involved with raising an unproductive animal.

So, the use of the phrase appeared to describe that if someone gave you a horse for free, you would not check its teeth because having an old horse is better than having no horse.

The phrase first appeared in John Heywood’s book, “A dialogue conteinyng the number in effect of all the prouerbes in the Englishe tongue,” in 1546. The phrase also has roots in the Latin text of St Jerome, in “The Letter to the Ephesians,” in AD 400.

Some people may use the phrase when talking about horses. The term has nothing to do with these animals. It refers to gifts, not animals.

You can use “don’t look a gift horse in the mouth” when telling someone to stop investigating their good fortune and accept their fate. It’s a way of telling someone that they should be grateful for their current situation or circumstance and forget about the intentions behind how they arrived at this point in their life.