Are you looking at someone that looks identical to someone you know? If so, you could call them a “dead ringer.” This post unpacks the meaning and origin of this expression.

The expression “dead ringer” has two meanings. The word’s original meaning is to describe someone or something that is a direct lookalike to a person you know or another object. Other phrases with the same meaning would be “100% duplicate” or “exact duplicate.”

The Dead Ringer is also a reward when you complete 17 of the Spy achievements in the video game Team Fortress 2. The player can craft it, receive it as a random drop or purchase it in the Mann Co. Store. Spies using the “Dead Ringer” can cloak at will.

So, using the “dead ringer,” you trap people raiding your body, spawning behind them and killing them before they have the chance to make off with your loot.

“Look at that girl over there. Don’t you think she’s a dead ringer for my cousin Sandy?”

“I’m telling you, man, Alex Jones is a dead ringer for Bill Hicks. He looks just like him, and there’s a huge conspiracy online talking about it.”

“That fighter is a dead ringer for my brother; it’s kinda creepy how similar they look alike.”

“Some people say that girl is a dead ringer for Hillary Swank, but I don’t see it.”

“That dead ringer took me by surprise. One minute I think the campaign is going well, and the next, I have to respawn.” 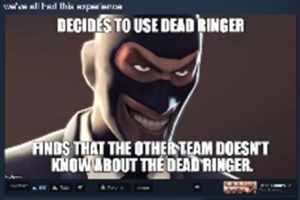 The origin of the saying, “dead ringer,” comes from the US horse-racing community at the end of the 19th century. The expression appeared in print for the first time in the “Manitoba Free Press” in October 1882.

“A horse that is taken through the country and trotted under a false name and pedigree is called a ‘ringer.'”

Therefore, a “dead ringer” has the same definition as a “doppelganger” or “exact duplicate/copy.” The phrase went on to describe people with similar facial features. The earliest use of the expression in reference to people comes from the Oshkosh Weekly Times in June 1888.

The column describes the court report of a man charged with being drunk in public.

“Dat’s a dead ringer fo me. I nebber done see such a semblence.”

Phrases Opposite to Dead Ringer

Some people may use the phrase to describe sounds. The “ringer” doesn’t refer to a bell; it refers to someone’s face. Using the term to describe anything other than someone looking like someone else is the incorrect use of the expression.

You can use “dead ringer” in social and professional conversations. You’ll use the expression when referring to someone who looks similar to someone you know personally or in the public sphere, like a celebrity. For instance, you could see someone that’s a dead ringer for your sister or a dead ringer of Matt Damon.

The phrase also has online use in the gaming community. You’ll use the expression to describe someone that cloaks themselves and kills you in the game Team Fortress 2.