Is someone talking to you in a dialect you can’t make out? If so, you could tell them to slow down because it sounds like they are talking “double Dutch” to you. This post unpacks the meaning and origin of this expression.

The expression “double Dutch” means someone is speaking to you, and you can’t understand what they are saying due to their dialect.

The reason for using “Dutch” in the phrase is that it’s not a well-spoken language in the United States. It’s similar to the saying, “it’s all Greek to me,” meaning that you have no idea what the person is saying because you don’t speak Greek.

Double Dutch is also the name of the kids’ jump rope game. The game involves the use of two jump ropes instead of one.

Double Dutch also has an X-rated meaning. It refers to a sex act committed by two men. Typically, when people use the saying, they refer to the language context of the expression. Kids will use the jump-rope phrase, and the explicit version is common in forums and message boards online.

“Hey Melissa, I’ll meet you in the park at 3 pm with Robyn for a game of double Dutch. Are you in?”

“Wait, slow down; I can’t understand what you’re saying; it’s like you’re speaking double Dutch or something.”

“Have you spoken with the next exchange student? I can’t understand a word he’s saying; it’s like he’s speaking double Dutch.”

“The lady tried to tell me something, but she spoke in some thick accent like double Dutch. Whatever it was, I couldn’t make it out, so I just nodded.”

“That CEO is speaking double Dutch; I don’t think he even knows what he’s saying.” 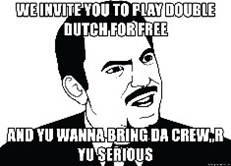 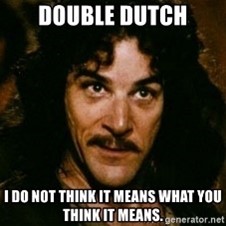 The origin of the saying, “double Dutch,” has several sources. The first is from the name of the children’s game involving two skipping ropes. Alice Gomme’s “The Traditional Games of England, Scotland, and Ireland,” published in 1894, lists the game.

The game is still popular today, with the biggest competitive markets in the US, Japan, South Korea, and China.

However, language experts suggest that “double Dutch” has maritime origins. Sailors would call winding a rope in an anti-clockwise direction “coiling against the sun.” This action would coil and twist the rope, and sailors would refer to it as “double Dutch winding.”

So, the meaning of coiled and twisted rope translates to the modern jump rope game where the two ropes flail around in the air and have the prospect of clashing together and coiling.

Phrases Opposite to Double Dutch

There is a recent trend online in chat forums like Reddit and 4Chan using the term “double Dutch rudder.” This saying describes a sex act between two men. While it gained popularity around 2015, it’s not the correct use of the expression and may get you in trouble if you use it in the wrong situation.

You can use the phrase “double Dutch” When you want to call friends for a skipping game using two ropes. You can also use it to describe someone’s unintelligible language. For instance, you could ask your friends to come around to your place for a game of double Dutch and a cold drink. You could tell someone that they speak “double Dutch” if you can’t make out what they are saying in the conversation.