Did someone just challenge you to a task? You could reply with, “the game is afoot.” This post unpacks the origin, meaning, and use of this idiomatic saying.

The Game is Afoot Meaning

The phrase, “the game is afoot,” means that something exciting is about to start or it has already begun. The game could involve anything from a sports challenge to a math problem, making it an idiom suitable for diverse use in language and conversation.

You can use “the game is afoot” when accepting a challenge, either indirectly or directly. The saying also appears on many memes involving “Sherlock Holmes,” the detective from the fictional novel series created by Scottish writer Arthur Conan Doyle.

Holmes had many catchphrases, and one of them was “the game is afoot,” meaning that he assumed the challenge of finding the killer involved in the storyline. You can use the phrase when acknowledging someone’s challenge, and the tone of the words would let them know you mean business.

The Game is Afoot Example Usage

Watson: “It looks like the attacker fled the scene, leaving behind this evidence before he had time to clean up the scene.”

Holmes: “Precisely Watson, and now the game is afoot.”

Sales manager 2: “Let’s see you try; we’ll catch you in the end. The game is afoot.”

Kim: “There is no way you can convince me to go there. I don’t want to go.”

James: “The game is afoot. You know I’m going to do everything I can to convince you otherwise.” 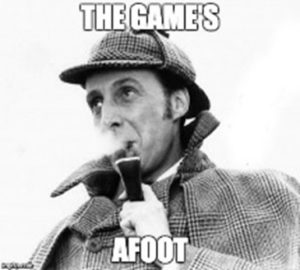 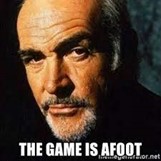 The Game is Afoot Origin

The idiomatic expression, “the game is afoot,” originates from the famous William Shakespeare play, “King Henry IV, Part I,” published in 1597. The play uses the phrase in the following format.

“Before the game is afoot, thou still let’s slip.”

Interestingly, the phrase didn’t alter its original meaning, and it features in thousands of literary works. Marvin Kaye wrote the novel “The Game Is Afoot: Parodies, Pastiches, and Ponderings of Sherlock Holmes.” The book presents a collection of pastiches, essays, parodies, and academic analyses of Sherlock Holmes and his cases.

The author reveals the lesser-known truth about Holmes and his endeavors. Some of the tales involve important historical figures like Consuelo Vanderbilt, McNeil Whistler, P.G. Wodehouse, and Ida Tarbell. The novel also explains the hidden secrets of Titanic and Holmes’ rematch with the lady, Irene Adler.

The book also reveals the childhood of both Watson and Holmes, and the phrase in the title introduces the theme of the untold facts leading to Holmes’s exploitation.

Phrases Similar to The Game is Afoot

Phrases Opposite to The Game is Afoot

Ways People May Say The Game is Afoot Incorrectly

This idiomatic phrase has nothing to do with games or feet. You’ll use the idiom as a reactionary response to someone else’s challenge. Using the phrase to describe a soccer match or some other event involving feet is the incorrect use of the term.

Acceptable Ways to Phrase The Game is Afoot

You can use “the game is afoot” in social and professional settings when you want to insinuate that “the game is on” between you and another party or an action. For instance, your rival sales team could call you and tell you that they intend on breaking your record this month. Replying with “the game is afoot” would be an appropriate use of the term.