Are you reading through a 4Chan post, and people are talking about “weaponized autism?” What on earth is that? This post unpacks everything you need to know about this niche idiomatic expression. We’ll discuss its origin, meaning, and how to use it in conversation.

“Weaponized autism” refers to the actions and capabilities of tech geeks frequenting messages boards like Reddit, 4Chan, and 8Kun. These individuals think they are intelligent but make silly mistakes with disastrous results.

The phrase can complement other users on message boards or insult them. You can use the term to describe individuals or groups of people. Weaponized autism can also refer to tech-savvy individuals who can achieve a lot with limited digital resources than giant corporations and governments.

Mike: “I love that show, It’s Always Sunny in Philadelphia; they are such a bunch of cynics.”

“Sure, 4Chan is barely acceptable, but 8Kun is like weaponized autism.”

“Have you heard what Sylvie is trying to do with her project? It’s like listening to weaponized autism.” 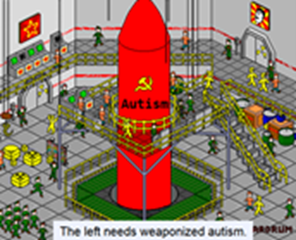 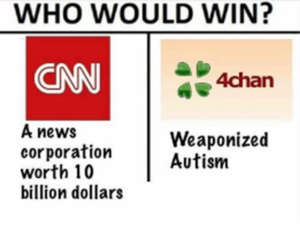 The earliest use of the term “weaponized autism” occurs online on the website “Cracked.” The site published a 2010 article, “The 5 Most Ridiculous Martial Arts Movies Ever,” describing the superpowers and feats of the protagonist in the 2008 film “Chocolate” as a form of “Weaponized Autism.”

The term would remain obscure for nearly five years before emerging again in late December 2014. A user “friedgreenpomatoes” on the FunkyJunk website left a comment reading, “I think we have finally weaponized autism” when responding to an anecdote of a student attacking another student for making the statement, “old Spongebob episodes were garbage.”

The phrase would also appear in April 2016. The Redditor, “Fahrenheit_616” uploaded a screenshot gallery from a 4Chan thread where viewers leaked the location of a Syrian Rebel training camp, leading to the Russian government bombing the site a few days later.

The phrase would also experience adoption from right-wing groups in 2017. In March, the term would appear on comment boards after capturing the “He Will Not Divide Us” flag. 4Chan users discovered the flag by tracking star movements and flight patterns and star movements. As a result, other users would say that the operation was a clear example of “weaponized autism.”

Phrases Opposite to Weaponized Autism

Some people may use the phrase “weaponized autism” around people with learning disabilities or mental health issues. As a result, some individuals may take offense with your use of the term, much the same as the use of “retard” is no longer acceptable in social communications. Some people may also use the phrase to describe stupidity, which is incorrect.

You can use “weaponized autism” in verbal and online communications. However, it’s more common to use it online. The phrase has a niche use, and some people might not understand what you’re saying if they don’t understand message board culture. Surprisingly, the use of the word “autism” in the phrase refers to intelligence more than idiocy.