Are you wondering about the meaning of the idiom “wide berth?” This post unpacks everything you need to know about its origin, meaning, and use in conversation.

“Wide berth” could have several meanings. First, you could be using the phrase in its original nautical context. If that’s the case, you’re using it to refer to giving a wide distance between your vessel and other boats and watercraft in the local vicinity.

To give another vessel a wide berth means that you are putting as much distance between the two vessels as possible. Typically, this language refers to the distance in the dock or harbor and at sea.

“Wide berth” has another meaning, referring to someone overweight or obese. The reference is to the individual’s waistline being as large as a ship, requiring you to make room for them because their body takes up so much space.

“Look at the size of that guy; he must be 400-pounds. Make sure you give him a wide berth when he walks past.”

“Take a look around you when pulling out of the dock and give a wide berth to any vessels in the local area.”

“She is as big as a house. I bet she needs a wide berth when getting into the car.” 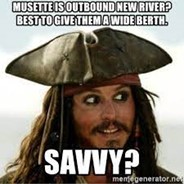 “Wide berth” is a nautical term originally used as far back as the 17th century. The origin of the nautical phrase would come from the English, referring to the distance between vessels when pulling in and out of ports and harbors and when contacting other vessels at sea.

The ship’s berth can be the living quarters inside the vessel’s hull, and it can also refer to where you moor a boat. The original meaning of “berth” goes back to the following definition, “a place where there is sea room to moor a ship.”

The word “berth” possibly derives from the phrase “bearing off.” Sailors would use the phrase to warn other sailors or the captain to keep a wide bearing off any other objects at sea or in the harbor or port. The purpose of the phrase was to ensure that there was enough sea room between the two vessels at all times.

Getting too close to the other ship increases the chances of contact between the vessels and a sinking event. Captain John Smith wrote the following in his book, “Accidental Young Seamen,” in 1626.

“Watch bee vigilant to keepe your berth to windward.”

As a result, “berth” entered widespread adoption through the English language, meaning “distance from.” In 1829, Sir Walter Scott wrote “Letters on demonology and witchcraft for ‘a wide berth.” The book has the following excerpt.

“Giving the apparent phantom what seamen call a wide berth.”

Phrases Opposite to Wide Berth

Some people may not understand nautical language, or the reference “wide berth” makes to others. Typically, millennials and Gen Z groups might not understand what the phrase means.

You can use the phrase “wide berth” when you’re describing giving someone room or when referring to an overweight or obese person. Typically, when referring to overweight people, you won’t say it to their faces as the phrase is somewhat of an insult to them. You can also use the term when describing the room you need to give other objects or people around you on occasions like pulling a boat out of a harbor.