Did you hear someone mention the phrase “willy nilly” in conversation? What on earth does it mean? This post unpacks everything you need to know about this idiomatic expression’s origin, meaning, and use.

When you’re using the phrase “willy nilly” in conversation, you’re referring to someone’s actions or attitude being haphazard or unenthusiastic. The more common meaning of the phrase is to insinuate that the person has no planning or direction in the task, and they wander around aimlessly wondering what to do.

A second meaning of the phrase is to imply that an outcome will happen regardless of whether the parties prepare for the outcome or if they want it to happen at all. For example, you could say that both armies entered into the conflict with a willy nilly strategy.

“You can’t just walk into the middle of the stage all willy nilly and expect to put on a performance that stimulates a good reaction from the crowd.”

“The president won’t take a willy nilly approach to geopolitical tensions; he meticulously plans every action in US foreign policy.”

“Look at Jake; he just waltzes into the ring all willy nilly, looking like he hasn’t trained a day in his life.”

“Thomas decided that taking a willy nilly approach to the situation might end up in disaster, and he’s looking deeper into the data right now to find a better solution.” 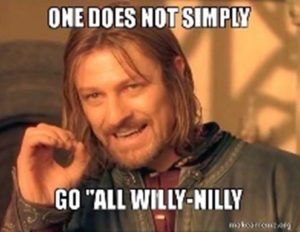 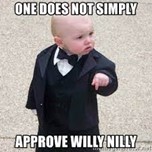 “Willy nilly” appeared in language towards the end of the 17th century. The phrase’s original meaning was to describe a task or action requiring immediate action, regardless of how the person feels about completing the task.

Willy nilly is a modification of an older saying or phrase expressed as “nill I,” “will I,” “nill ye,” or “will ye.” The term came together in the original form of “nilling willing.” The will in the phrase provides the sense of wanting to complete a task or action or desire the positive outcome of an event.

When you complete a will, you’re expressing the will for the distribution of your assets in the event of your death. Nill is an old word used around the Norman Conquest, but it has long since disappeared from everyday speech and language.

Nill was an antonym to will, and it displays the attitude of not wanting, refusal, or rejection, of a person, action, request, or task. Expanding “will I, nill” I to “be I willing, be I unwilling” combines the sentiments implying it doesn’t matter how you feel; you’re stuck with completing the task or request.

Some experts suggest that willy nilly comes from a Latin origin, but there is no conclusive evidence for either argument.

Phrases Opposite to Willy Nilly

The phrase “willy nilly” suits use in social and professional conversations. You will use it to describe a haphazard or careless approach to a situation that demands better planning and consideration than you give it. Therefore, using the phrase to describe a well-thought-out strategy is the incorrect use of the phrase.

You can use “willy nilly” to describe a person’s haphazard approach to a task or situation. You can also use it to refer to companies or sports teams and various other applications. The phrase can have a deep, threatening warning of dire consequences, or it can describe a lighthearted approach with little to no adverse consequences.