Are you wondering about the meaning and origin of the saying “yas queen?” This post unpacks everything you need to know about this idiomatic phrase.

“Yas queen!” is an expression of excitement and support for another person. Typically, the idiomatic phrase has a positive connotation, but there are some instances where it can have sarcastic use. The original spelling defined in the Urban Dictionary is “YAAA-SSS-SSS kwEEn,” and it holds the same meaning as a show of love and support.

The Oxford Dictionary also recognized the pervasiveness of the phrase, adding “yas” to its list of definitions in 2017.

The addition of the “queen” to “yas” comes from drag culture, and it refers to a drag queen strutting her stuff on stage and her friends and fans cheering her on. It’s a very similar phrase to “you go, girl,” but with a unique drag style to it.

One of the common spellings of the word is “yas kween,” and there are several variations of the spelling you’ll see in chats and messages online. It’s common for people to add extra “A‘s” or “S‘s” to the yas and “E‘s” to the queen. So, you could see the spellings as the following variations.

The prolonged use of the additional letters drives home the emphasis on the phrase.

Tim: “I’m thinking of going to the gay pride parade to support the community with a standup set.”

Yannis: “Yassss queen, das it, you know I gots ta have it, you go girl!”

Ben: “I’m going to get up on stage and show everyone how I can twerk better than Nicki Minaj.

Bruce: “Yas queen, you show those haters what they’re missing out on; you go, girl!”

Gloria: “I can’t wait until I get my man into the store and abuse his credit card. He owes me for being good to him. While I’m at it, I think I’ll book an appointment for my hair and nails too.”

Caitlyn: “Yas queen, you do that, you deserve that, and he deserves to pay.” 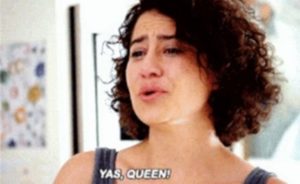 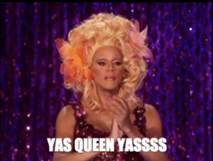 The origin of the phrase “yas queen” comes from drag queen culture. The first known use of “yas” occurs in the documentary “Paris is Burning” in 1990. The word yas experienced widespread adoption across drag culture in NYC in the late 80s and 90s.

Drag balls were common events in the community, where queens would parade on the catwalk. Eventually, other viewers to the spectacle would start exclaiming, “yas queen” as a show of their support for the other’s performance.

The phrase went viral in 2013. During the summer, “Johnny Versayce,” a drag queen obsessed with the pop star Lady Gaga, used the term “Yassss Gaga!” after meeting with the influencer on TV. The moment went viral across social media platforms, leading to a meme craze over the following years.

Phrases Opposite to Yas Queen

Some people may use “yas queen” as a slur to describe a drag queen or gay person’s speech or actions. This is insulting and offensive to many woke people that believe everyone deserves equal rights and treatment, regardless of their sexual orientation.

You can use “yas queen” regardless of whether you’re straight, trans, or gay. The phrase suits a situation where you’re looking to agree with someone in an overwhelming manner. Your message would provide them with support for whatever they are doing or planning. Yas queen can also have a derogatory meaning as a dog whistle for recognizing homophobic people.