If you’re booking a vacation and the agent asks you if you want “the whole shebang,” what do they mean? Are they offering you some strange meal package or something?

This post gives you the origin, meaning, and use of this idiomatic phrase in conversation.

The meaning of the phrase “the whole shebang” is similar to the more common, “the whole enchilada.” It means that you want to entire group or thing. For example, if your professor tells you that they want the whole shebang in your report, they’re asking you to give as much detail as possible in your work.

If your professor tells you that the upcoming exam will cover “the whole shebang,” they mean that you’ll need to study all the course material for the test if you want to pass. It’s an all-encompassing phrase telling people that you want everything included.

You can use the “whole shebang” in several situations, and it’s a versatile phrase. However, some younger generations in the late millennial and Gen Z generations might not understand what you mean. It’s still a common phrase, but many people substitute out the “shebang” for other items like “the whole ball of wax” or the more common “the whole enchilada.”

“I want the whole shebang at the venue tonight. Make sure you organize the catering, the music, and everything else. I want the event to be perfect.”

“John just gave me the whole shebang, and now I have a clearer picture of what’s going on.”

“I went up to the counter and went mad. I ordered the entire menu – the whole shebang.”

“We’ll have to explain the whole shebang to you if you want to get up to speed with the project.” 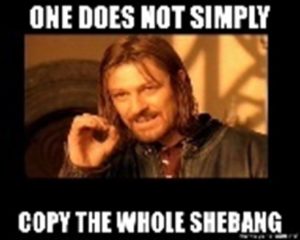 Shebang originates from American culture during the late 1800s. The first known use of the phrase comes from the Civil War, where soldiers would use it to describe a hut or rustic dwelling. The poet Walt Whitman would go on to be the first to use it in his poetic works.

In 1872, American author, Mark Twain, used the word “shebang” to describe a vehicle. The use of the term would describe the banging sound made by the motor. However, this use of the phrase didn’t stick.

However, the word appeared in the phrase “the whole shebang” in a newspaper column in the same year. The newspaper would use the phrase, and it started to gain traction in modern language.

The phrase is popular with the boomer generation. However, you’ll find that most Gen X’ers and some late millennials will understand the meaning of the phrase.

Phrases Similar to The Whole Shebang

Phrases Opposite to The Whole Shebang

This idiom refers to asking someone for more information or a complete picture of an event or request. It also refers to asking for a total experience or unlimited access. It does not refer to the “shebang” specifically.

You can use “the whole shebang” when you’re asking people for an extended version of their story or when ordering a product or service. For instance, your doctor could ask you want vitamins you want in the drip, and you could reply with, “just give me the whole shebang, doc.” The idiom refers to asking for the bigger picture or a collective of thoughts, people, objects, or services.