Are you talking to someone and find yourself going off-topic? If that’s the case, you could always get the conversation back on track by using the “I digress.”

This post unpacks the origin and meaning of this idiomatic expression.

The meaning of “to digress” is to take the conversation off-topic to a tangent. You’ll use the phrase when you realize you’ve been talking for some time about a topic that has nothing to do with the original conversation.

Using “I digress” helps you pull your train of thought away from the tangent, focusing it back on the original topic of conversation.

Typically, you’ll be answering someone’s question or query, and you’ll find that they are starting to lose interest in what you’re saying, and you’ll drop “I digress” to capture their attention, steering the conversation back on track.

Many people become frustrated with using the phrase because they never digress back to the original topic but instead use the term to end the conversation.

“I was thinking about how I should eat more vegetables to get healthy, but I digress; I don’t think there’s anything wrong with eating a carnivore diet.”

“I digress here to pay respects to the fallen. However, I don’t want to digress from the many valid points in this discussion.”

“My aunt Julia would use Seville oranges when making marmalade at home. I digress; I think that sweeter oranges are the way to go when making the preserve.” 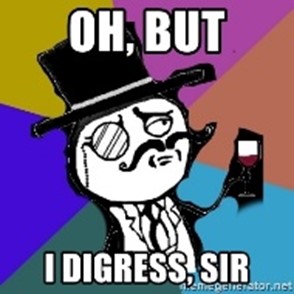 The word “digress” has origins extending back to the 1500s. The word changed in the early 1500s, and by 1530, it had the definition of “to veer off-topic,” and it retains that meaning in modern language. Digress comes from Latin origins and shares the same root as other words like “aggressive,” “gradient,” and “progress.” The root translates to “to step away.”

The phrase “but I digress” first appeared in the mid-19th century, where people would use it to get their conversation back on track after taking a tangent away from its original purpose and intent. “I digress” is a common expression in modern language, and it usually features as “but I digress.”

Some writers use it as a humorous statement, using the phrase to redirect their story back to its original path after taking a tangent to explain other related incidents affecting the storyline. You’ll find “but I digress” in frequent use in modern pop culture.

Phrases Similar to I Digress

Phrases Opposite to I Digress

Acceptable Ways to Phrase I Digress

You can use “I digress” in professional and social settings. However, the phrase may irritate some people, especially if you use the term and don’t digress to another statement. When making a statement, you can use the term to show that you thought one way and then shifted your opinion.