Did you ever watch the hit web series “Letterkenny?” If so, you’ll probably hear the actors saying “wheel, snipe, celly” from time to time in the episodes. What does this idiomatic phrase mean, and how can you use it in conversation? Let’s unpack the origin and meaning of “wheel, snipe, celly.”

The idiomatic phrase “Wheel, snipe, celly” is a slang saying referring to the words, “Skate, shoot, celebrate.” Modern culture saw the integration of certain words to replace others and the extension or shortening of terms to form similar meanings.

However, “wheel, snipe, celly” is ice hockey slang created by YouTubers. The phrase describes the three most important parts of a hockey game and the player’s performance.

Apart from the original hockey reference, “wheel, snipe, celly” can also refer to other life events and tasks, such as picking up women. In this case, the wheel would be approaching the woman, snipe would be sleeping with her, and celly would be celebrating the victory.

So, you can apply the saying in many situations, even something as insignificant as throwing a paper ball into the wastebasket. Shooting the paper ball would be the wheel, the snipe would refer to the paper ball landing successfully in the basket, and the celly would be your celebration for achieving the feat.

“Gretzky skates down the ice towards the goal, wheel, snipe, celly. It’s all over; the Kings win the Stanley Cup.”

“I took this girl out last night, and everything went perfect wheel, snipe, celly!”

“Watch me land this paper ball in the wastebasket from across the room. Wheel, snipe, celly, it did it!”

“You know what you have to do with the project this afternoon. Wheel, snipe, celly, and we’ll dominate the competition.” 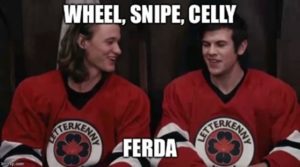 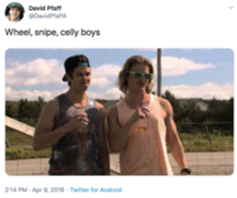 The slang phrase “wheel, snipe, celly” debuted on the channel of Canadian YouTuber Letterkenny. The popular channel exemplifies Canadian youth culture, and it has a huge audience. The Letterkenny web series launched in 2013 saw the characters’ first use of the phrase in the episode titled “Hockey Player.”

The saying spread onto message boards and chat forums, and you’ll find it popular among the youth. Many young people will understand what you’re saying with this idiom, even if they never watched an episode of the Letterkenny web series show.

Phrases Opposite to Wheel, Snipe, Celly

Many people won’t understand what you’re saying with the phrase, “Wheel, snipe, celly.” They might not understand the terminology if they have no history of watching the show Letterkenny or aren’t ice hockey fans.

You can use “wheel, snipe, celly” in various social communications. Typically, you’ll be using it with friends who understand what you’re talking about and the reference to the Letterkenny show or ice hockey. Some people may also use the phrase to describe other situations, such as picking up women.