Did someone just call your group of friends a bunch of “malakas?” If you don’t know what it means, the chances are that person was Greek, and they were insulting you.

This post unpacks everything you need to know about this idiom. We’ll look at its meaning, origin, and use in conversation.

If someone calls you a “malaka” they are likely calling you a “wanker.” The word malaka translates to “he who masturbates.” It’s a common word found in Greek culture, and if you have Greek friends or watch Greek comedy, like Yannis Pappas, you’re likely to hear the word from time to time.

“Look at those malakas over there, they’re standing too close to the water, and that wave is about to sweep them out to sea.”

“The boss is being a real malaka today. He knows we have everything up to date, he’s just trying to find stuff for us to do, and it’s this close to the holidays.”

“The gym is just a room full of malakas jerking each other off about how good they look in the mirror.”

“You think you look good in that outfit, but you look like a malaka from the 70s.” 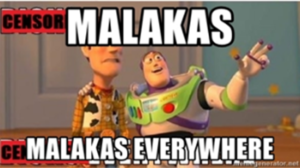 Malaka is a Greek term, translating to the English “wanker.” It means “he who masturbates,” and it’s a very common term used in Greek culture. Walk into any Greek bodega, and if you upset the manager, you’re likely to hear them call you this slur while they complain about what you’re saying or they ask you to leave.

The term gained its modern meaning and its use in popular language in the 1800s. During the early use of the word, people would reference someone who was stupid or slow with their thinking. However, it evolved to calling someone more of a derogatory slur than referring to mentally challenged individuals.

Greek people spread the use of the word throughout the world, with many English-speaking countries finding the use of the word entertaining. Typically, people will use it when referring to strangers and to people they know. You can use it with an aggressive negative connotation or in a lighthearted, joking manner.

Phrases Opposite to Malakas

Some people may use the word Malakas incorrectly and not as a slur. They may confuse the meaning and use it in the wrong context, causing offense to other people. It would also not be polite to use this slur at a Greek person as an insult; they would likely get very angry with you.

You can use the word “Malakas” when you’re around Greek people and want to make them laugh, or when you’re attempting to scold or insult someone and want to confuse them with what you’re saying. Typically, the phrase is more common in European nations, and many Europeans understand the meaning of the term.