Are you a gamer? Do you spend time on the Twitch platform? If so, you’ve probably seen the “ForsenCD” meme or emote floating around the site, but what does it mean?

This post unpacks everything you need to know about this popular meme’s meaning, origin, and use.

“ForsenCD” is an online term used by the gaming community. When you’re using “ForsenCD,” you’re likely referring to fans of “Drdisrespect,” a former Twitch streamer. “ForsenCD” is a trolling term meant to induce anger and frustration in fans of Drdisrespect. Drdisrespect amassed a huge following on the platform before being expelled for his transgressions on the site.

As a result, other users on the platform will use the term to institute anger or embarrassment in the other person. As a result of using the term, the Drdisrespect fan will launch an attack on the troll, or they will leave the chat with their tail between their legs.

The emote appears on the FrankerFaceZ browser collection, and it’s a mainstay on the “Forsen” channel on the Twitch site. If you subscribe to the Forsen channel, you’ll find you can use the emote anywhere on the site. The emote features Forsen’s face wearing sunglasses, sporting the look of Drdisrespect.

There are several emotes ending with the CD tag. However,  the “ForsenCD” emote is the official emote used on the Twitch platform when mocking fans of Drdisrespect. 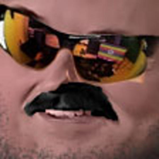 Chat User: Tell me, are you a DrDisrespect fan?

Forsen refers to the stream or channel, while the “CD” component of the emote refers to “Cheating Disrespect.” One of the most popular streamers on the platform, Drdisrespect, garnered an infamous reputation on Twitch, experiencing mockery from the community as people would gang up against him after he bullied other users.

As a result, people would use the term to mock Drdisrespect and his fan base on Twitch. Some people state that the “CD” portion of the word may originate from the Twitch text-to-speech pronouncing it “D omegalul C” on the Forsen channel.

The emote, however, is a direct reference to Drdisrespect, featuring his sunglasses and mustache as the primary visual elements of the emote and meme.

Drdisrespect ended up receiving a ban from Twitch in 2020, and users now use the emote to mock his fan base when they talk about him on the platform.

Some people may use ForsenCD incorrectly in chat. Typically, it’s a spam comment used by people to make fun of DrDisrespect fans. It is not a supportive term and more of an insult to the other poster. Using ForsenCD usually starts other people pilling into the chat to mock the poster. You might not understand the term if you don’t know anything about the Drdisrespect saga.

You can use ForsenCD when attempting to spam and mock DrDisrespect fans. You can use the term in the Forsen channel on Twitch chat. However, “ForsenCD” might be popular, but it has a niche use, and many people don’t bother using it anymore.