Are you a gamer? Do you know what the meme “PogU” means? Chances are you see people posting it in chat and on forums all the time, but what does it mean? If you enjoy gaming, then you can’t miss out on posting this meme from time to time; it always gets a laugh out of other players.

This post unpacks everything you need to know about this popular meme. We’ll discuss its origin, meaning, and how to use it.

PogU is the replacement emote for the original meme “PogChamp.” This meme appears in thousands of posts online, and it’s popular in chat forums and gaming platforms like 4Chan and Twitch. You’ll use the meme when reacting to a shocking or surprising event during an online gaming event.

POG stands for “Play of the Game.” People may also use the meme to describe a cool move or action during gameplay that takes them by surprise. For example, the player may think they are safe, and your character appears out of nowhere to kill them. The player could voice their surprise by posting PogU in the chat or posting a meme.

Anyone involved with the game that notices the action may also post the meme or the word. The word gained popularity, changing shape as it evolved with use. The latest reiteration of the meme replaces Ryan ‘Gootecks’ Gutierrez’s shocked face with a lizard, and people seem to find that the more popular of the variants in online gaming.

PogU is an exclusive gaming term and meme. If you don’t frequent chatrooms, streaming sites, or gaming platforms, you’re likely never to encounter the word or the meme. However, if you are a gamer, you need to know the meaning of this meme to enhance your gaming experience. 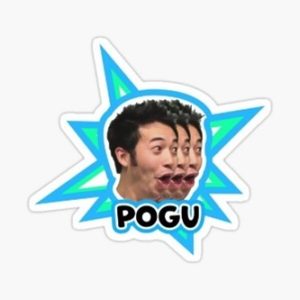 The PogU (POGU) meme is a variant of the original meme “PogChamp.” The PogChamp meme first appeared on the streaming service “Twitch” back in 2012. The original meme featured a picture of the gamer, Ryan’ Gootecks’ Gutierrez’s face showing a surprised expression, with his mouth wide open to express his surprise and his reaction.

The meme comes from a show where Ryan reacts with the expression after a cameraman tips over his tripod, damaging a very expensive camera.

The original PogChamp meme was taken from a streaming video. The reaction ended up gaining momentum as a screenshot meme, with the caption “PogChamp.”

Variants of the word and the meme appear across social streaming sites, like Twitch, and other common variations include “POG” and “POGGERS.” PogU ended up replacing PogChamp after Twitch pulled it from the platform for being racist.

The FrankerFaceZ browser for Twitch streamers added the emote to its extension in 2018, allowing streamers to use it in the chat. There are more than 77,000 channels that integrate the PogU emote from the FrankerFacez browser.

Phrases Opposite to PogU

PogU is an online expression and meme. Therefore using it outside of the online world is not applicable in conversation or language. If you say the word “PogU” to someone, they won’t know what you’re talking about unless they use streaming platforms like Twitch.

You can use the PogU meme when you’re trying to hype up a reaction to an event or a scenario. The meme shows your response and excitement to what’s happening at the moment. Typically, you’ll use the meme when reacting to streams online.