Did someone just post the “Stahp” meme in the chat? What are they trying to tell you? This post unpacks the origin, meaning, and use of this idiom.

“Stahp” is a slang term evolving from modern pop culture. The meaning of the word is “stop!” It’s a common meme on message boards, and people use it to tell other people to stop their current behavior. The word has positive and negative connotations, depending on the context of the situation.

For instance, if a friend is complimenting how good you look, you could use it as a way to thank them for the compliment while remaining humble. If you’re listening to someone drone on about conspiracy in the chat, you can use the meme to request them to keep quiet or change the subject.

Typically, the phrase or meme appears in a funny context when the conversation in online chat goes too far, and the people want it to stop. It’s common for many users to start spamming the chat with the meme when they want to get the poster to stop talking about a specific subject.

“Oh no, Stahp Sally, you’re killing me with this story; I can’t stop laughing.”

“Just stahp Kim, I know you were with Kevin last night; I saw his Instagram story when you guys went for dinner.”

Chat 1: “Did you watch Dave Chappelle’s new special last night? I was laughing so hard I almost cried.”

Chat 2: “Yeah, halfway through it, I was just yelling “stahp!” cause I couldn’t take it anymore.” 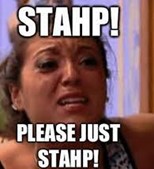 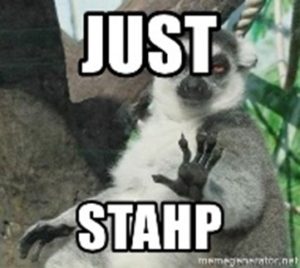 According to the Urban Dictionary, “stahp” appeared in modern language in 2011. Its original format came as a meme, circulating message boards like 4Chan. The phrase’s first use was a meme of the popular character, “Snookie,” from the MTV hit reality show, “The Jersey Shore.”

The meme features a close-up of Snookie withdrawing in frustration, with the word “Stahp!” in the caption. The meme went through an evolution that saw the caption change into several variations, such as “Oh, just Stahp!” and “I’m begging you to stahp!”

The meme would also go on to attach to other memes. The memes went viral over the last ten years, and you’ll find it one of the most-used memes on chat sites. Typically, you won’t use this word in real conversation; it only suits message boards, chats, and text messages.

The connotation of stahp depends on the context. For instance, you could use it to tell your friend to stop telling you a story you find frustrating. Or, you could use it when people pay you compliments to show your appreciation for their kind words.

Phrases Opposite to Stahp

Some people may use the term around others that don’t know what it means. As a result, they may appear strange or weird to the other party. Typically, this idiom has more use online as a meme than in real conversation.