Are you searching for the meaning of “riled up?” If you’re with a group of people and they are exhibiting exciting behavior, they’re probably feeling “riled up” and ready to take action.

This post discusses everything you need to know about the idiomatic phrase “riled up.” We’ll look at its origin, meaning, and how to use it in conversation.

The idiomatic expression “Riled up” has two distinct meanings, depending on the context of the situation in which you use the phrase.

The original use of the term describes someone frustrated or very upset at the actions of someone or an entity. The word’s original meaning also applied to problematic behavior exhibited by children. For instance, children with ADHD may feel riled up if they spend too much time in the classroom, leading to fidgeting and disruptive behavior.

Riled up can also mean motivating or inspiring others to achieve their goals or company targets. The original use of the word “roil” was to disturb or excite.

As a result, the word also refers to the emotional state of people and the behavior they exhibit to others. So, if you wanted to “rile up” your sales staff, you would hold a 5-minute power motivational sales meeting right before they get out onto the sales floor to start the day.

“Man, that speaker got the crowd riled up and ready to rock.”

“Tom was feeling all riled up after the sales meeting and ready to hit the phones to contact his clients.”

“That documentary has me feeling all riled up about the way the government treats veterans.”

“Get out there and get the crowd all riled up. We want them to be ready to pull out their credit cards when you tell them the deal.”

“The entire industry feels riled up and ready to protest against these regulations.” 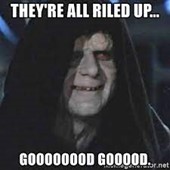 The origin of the idiomatic expression “riled up” traces back to the 1500s. The original form of the word “rile” derives from the word “roil.” The word means to disturb aggressively or stir up emotion. As a result, the spelling of “roil” turned to “rile” in the 1800s. However, regardless of the change in spelling, the words retain the exact same meaning.

The phrase “riled up” became popular in the 70s and 80s with the advent of corporate office culture and sales teams used in large companies. Managers would use “riled up” to describe getting their sales team motivated and ready to hit the phones to call clients.

“Riled up” also features in many Hollywood movies and TV shows, and it’s still in use in modern culture today. However, younger generations are more likely to use “psyched up” or “fired up” as a way of describing a high emotional state.

Phrases Similar to Riled Up

Phrases Opposite to Riled Up

“Riled up” refers to a person, group, or crowd feeling excited to the point where they need to take action to someone’s orders or requests. Therefore, the phrase isn’t suitable for describing people who are apathetic or unresponsive.

Acceptable Ways to Phrase Riled Up

You can use the phrase “riled up” when describing the reaction of a person, group, or large crowd to a motivating message said by yourself, a speaker, or even a video or song. Being “riled up” refers to being excited, so you’ll use it to describe a crowd that’s ready to take action.