Are you wondering about the meaning and origin of the idiomatic phrase, “stupid is as stupid does?” This post gives you everything you need to know about the use of this idiom.

“Stupid is as stupid does” is a playground retort between young children that evolved into cultural use in adult society over the years. The phrase carries the meaning of someone identified as stupid through their actions rather than their appearance.

The phrase means that stupid people will do silly things, and you can single them out by looking at their methodology and results with handling tasks. However, woke groups are targeting the use of this phrase, saying that the word “stupid” is derogatory.

Most people who use the phrase will be using it judgmentally. Therefore, many woke activists claim that the phrase no longer offers society any benefit, and it should undergo a ban on social media.

Mike: “Did you see Steve jump off that cliff without checking the water depth first?”

Rob: “Yeah, stupid is as stupid does; he’s lucky he didn’t kill himself.”

Cindy: “Terry’s kid isn’t so bright. Did you see he ate an entire box of crayons and had to go to the hospital?”

Mellissa: “Stupid is as stupid does; he’s got to learn his lesson.”

Carissa: “I can’t believe Jack threw away his life savings in the last crypto bull run. He’ll never understand how to trade right.”

Tim: “Stupid is as stupid does, he just doesn’t understand the principles of trading properly or profitably, and he’ll keep on losing.” 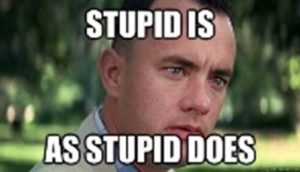 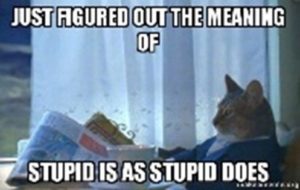 Stupid is as Stupid Does Origin

This children’s idiom is a part of the modern English language, and you probably hear it in conversations and media from time to time. While the exact origin of the idiom is unknown, experts believe it comes from the early 19th century.

It originally was as comeback response mothers would teach their kids. The phrase’s purpose was to protect their child against bullies attempting to make them look inferior to others on the playground.

The term went viral in the mid-90s when it appeared in the 1994 Tom Hanks movie Forrest Gump.

When it became one of the iconic catchphrases of the legendary motion picture Forrest Gump, Forest, played by Hanks, uses the catchphrase several times throughout the film to protect his dignity and remain humble during conversations with characters in the movie.

The Urban Dictionary added the idiomatic phrase of its listings in 2006. You’ll find hundreds of memes on the internet featuring the term and an image of Forrest Gump in the meme.

Phrases Similar to Stupid is as Stupid Does

Phrases Opposite to Stupid is as Stupid Does

Ways People May Say Stupid is as Stupid Does Incorrectly

The phrase “stupid is as stupid does” refers to the stupidity of others and calling them out on their actions or words. Therefore, you wouldn’t use this phrase to praise someone’s intelligence or when they complete tasks successfully.

Acceptable Ways to Phrase Stupid is as Stupid Does

You can use “stupid is as stupid does” in social and professional settings. You’ll use the phrase to describe the actions or conversations of others, pointing out their low intelligence. When discussing others with people, you know or directly to someone’s face, you can use this phrase. If you’re saying it to the person doing the silly action, they’ll likely take offense or embarrassment to your statement or reply.