Did someone tell you that you “jumped the gun” when taking on a task? What do they mean? This post unpacks everything you need to know about this idiomatic phrase’s meaning, origin, and use.

If you “jumped the gun,” it means you started a task too early instead of waiting for the right moment to execute your plan.

The phrase also means that the person might undertake a task without putting thought into it, acting on instinct instead of waiting for instructions.

For instance, if you decide to go ahead and request something from a client before checking with your boss, they could tell you that you “jumped the gun.”

In this scenario, the phrase could have a positive connotation if the boss likes you taking the initiative. It could also end up in them reprimanding you if it’s an unfavorable outcome.

“Jim really jumped the gun when entering that trade, and now he’s down ten grand. I told him to complete his research instead of just pulling the trigger.”

“The executive jumped the gun, announcing his appointment before the CEO had the chance to inform the board. Now it looks like they aren’t going to hire him.”

“The detective didn’t want to jump the gun and arrest the suspect before collecting all the evidence required for an open-and-shut case.”

“If we publish this, the public might panic and jump the gun on hoarding supplies before we secure the supply chain logistics.” 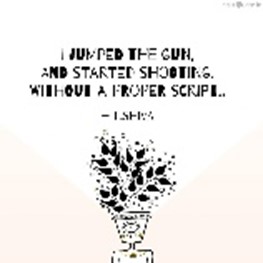 The origin of “jump the gun” traces back to track and field events. The original phrasing of the idiom is “beat the gun,” with this variation of the phrase appearing in the English language at the start of the 20th century.

The first known reference of the phrase in literature comes from Crowther and Ruhl’s book, “Rowing and Track Athletics,” published in 1905. The book contains the following.

“False starts were rarely penalized, the pistol generally followed immediately on the signal “Get set!” and so shiftless were the starters and officials that “beating the pistol” was one of the tricks which less sportsmanlike runners constantly practised.”

The phrase changed to “jump the gun,” applying to situations other than athletic competition. People would start to use the term to describe premature actions in decision-making processes. The Iowa Homestead used the phrase in its publication in 1921, where it reads as follows.

“Give the pigs a good start; jump the gun, so to speak, and get them on a grain ration before weaning time.”

The phrase would go on to receive several iterations, including “jump ship,” “jump someone’s claim,” and “jump the queue” in the mid-20th century.

Phrases Similar to Jumped the Gun

Phrases Opposite to Jumped the Gun

Some people may use the phrase to describe sports races where the athlete leaves the blocks ahead of the starting shot. While this is the root of the idiom, it has little to do with athletics and sports in everyday conversational use.

You can use “jumped the gun” when you’re trying to tell someone that their actions are too early or they are not waiting for the right moment to execute a plan. The phrase means to start prematurely, resulting in a bad outcome further down the line. You can also use the term to tell someone they failed to make adequate preparations before taking action.