Did you fail to perform in the bedroom with your partner? Maybe you’re doing a task that seems totally pointless or really frustrating? If that’s the case, you’re “pushing rope.” This post unpacks everything you need to know about the meaning and origin of this phrase.

If you’re “pushing rope,” it means that you’re completing an arduous task that has no purpose other than to cause frustration. Ropes are for pulling, not pushing, so pushing a rope is non-productive and serves no purpose.

The word’s meaning has a close relation to a “Sisyphean” task, meaning it’s something that you can never complete, no matter how hard you try. When “pushing rope,” you’ll feel like starting over from scratch every few minutes because you can’t seem to get it to work for you.

“Pushing rope” is an old idiom. However, it underwent remodeling in the 2010s, after the debut of the animated TV series Archer. Archer is a spy and a notorious womanizer. In one of the episodes, he ends up sleeping with his associate, Pam, after drinking too much whiskey.

As a result, he fails to perform, and Pam tells him that he was just “pushing rope,” referring to Archer experiencing erectile problems, making the sex seem pointless.

“I don’t know why the boss has me doing this task. I feel like I’m just pushing rope with this.”

“Why do you want me to clean the gutters? There’s a storm on the way, and they’re just going to fill up again. It’s like pushing rope.”

“I’m running back and forth between the accounting and HR department. Why don’t they just get an automated system? I feel like I’m pushing rope.”

“I’ve tried to get this to work like ten times in a row, and it’s going nowhere. I feel like I’m pushing rope; it’s time to give up.”

“That sex was terrible. Let’s be honest; you were just pushing rope there.” 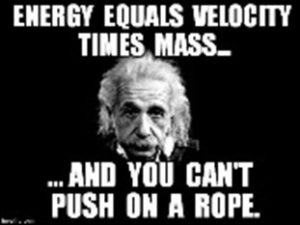 The origin of the phrase “pushing rope” comes from referencing the myth of “Sisyphus.” The Greek legend received sentencing to push a boulder up and down a mountain for the rest of eternity by the Gods. As he reaches the top of the mountain, he turns around and starts to make his way to the bottom, continuing the struggle with no rest.

As a result, the phrase, pushing rope refers to a pointless action that serves no purpose. However, language experts are uncertain when the idiom first appeared in language, and no written records point to the phrases’ origin.

Phrases Opposite to Pushing Rope

Some people may use the phrase when experiencing a weak erectile response during sexual intercourse. While there are several memes (featuring the animated character, “Archer“) of this variant, it’s usually only understood by younger generations, and older generations won’t understand the modern meaning of the phrase.

You can use “pushing rope” when you’re describing a pointless or arduous task. The phrase suits professional and social use. For instance, you would be “pushing rope” at work if you’re doing a job that goes nowhere and has no benefit to the organization. At home, you could be pushing rope if you’re not doing anything productive or with little importance.