Did someone just say that watching you play video games is starting to get “long in the tooth“? What do they mean? This post unpacks the origin, meaning, and use of this expression.

To be “long in the tooth” means that you are too old for a situation or a task. The phrase can refer to people, animals, objects, and more.

“Look at that guy over there; he must be over 100-years old. He’s looking a little long in the tooth.”

“I hear your idea Mike, but I think it’s a little long in the tooth. Our competitors were doing that at the beginning of last year already.”

“I loved that song when it debuted on the radio, but after listening to it so many times, I think it’s a little long in the tooth.”

“Why do you want to watch the Matrix again tonight? I mean, I love it as much as the next conspiracy kook, but it’s getting a little long in the tooth.”

“I think we need a new TV; this one is getting long in the tooth. Let’s get one of those new OLED TVs to replace it.” 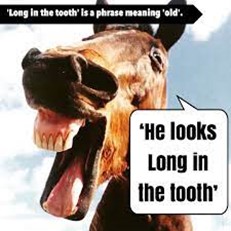 The origin of the idiomatic phrase, “long in the tooth,” comes from the mid-18th century. The basic meaning of the phrase is that horses experience receding gumlines as they age. As a result, many experts could tell the horse’s age just by looking at its teeth.

Horses were only viable for pulling carts or working in fields while they were young. The longer the horse’s teeth, the older it is, and the worse its physical condition. If the buyer would examine the horse’s mouth and find it “long in the tooth,” it would mean that the horse was past its working or competitive life.

People would repurpose the phrase to mean that people, ideas, or objects were aging and needing replacement. It still has plenty of use in modern society, and you probably hear it in conversation from time to time.

Phrases Similar to Long In the Tooth

Phrases Opposite to Long In the Tooth

Ways People May Say Long In the Tooth Incorrectly

Some people may use “long in the tooth” in the literal sense to describe someone with long or buck teeth. This idiomatic phrase has nothing to do with the person’s dental hygiene or the appearance of their teeth. It describes an outdated idea, person, or object.

Acceptable Ways to Phrase Long In the Tooth

You can use the phrase “long in the tooth” when discussing people, objects, or ideas. For instance, you could use the saying as a reactionary response to your boss pitching you an outdated notion. You could also use it to describe a senior, an old song, or an old movie. The phrase describes something or someone relevant but ends in obscurity.