Do you know the meaning of the idiomatic expression “pig in a poke”? This post unpacks everything you need to know about its origin and meaning, and we’ll look at how to use it in conversation.

The idiomatic phrase “pig in a poke” means to purchase something without demanding that the buyer reveal the particulars of the product or service that you are buying. For instance, if you were to buy a second-hand vehicle and discover weeks later that it is a stolen car, you got stuck with a “pig in a poke.”

The same phrase could apply if the car were in bad mechanical shape, requiring thousands of dollars in repairs to make it roadworthy and reliable. Essentially, “pig in a poke” means that you’re accepting a deal without conducting any evaluation or due diligence on the product or the purchase before finalizing the deal.

After making the purchase, the buyer discovers that the seller cheated them, leaving them with a “pig in a poke.”

“Why is it that I always seem to get the pig in a poke when buying something on Craigslist?”

“What do you mean it fell apart the next day? I think you got a pig in a poke there.”

“Casey drove for 30-miles to meet with that guy about the jet ski. He bought it and realized it had a seized engine. It looks like the seller found the pig in a poke that he needed.” 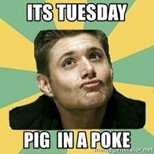 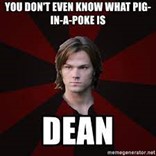 A “poke” is a 19th-century British word describing a bag. The poke conceals a product, whether food or technology, preventing the buyer from seeing what’s inside—the phrase originates from when people would buy suckling pigs from farmers for feasts.

The French variation of the idiom, “acheter chat en poche,” and the Dutch version, “een kat in de zak kopen,” refer to a similar scam. The British idiom “sold a pup” also holds a similar meaning to “pig in a poke.” There are writings of the phrase “sold a pup,” extending back in documents from the 1500s.

Phrases Similar to Pig in a Poke

Phrases Opposite to Pig in a Poke

Ways People May Say Pig in a Poke Incorrectly

“Pig in a poke” describes purchasing something without inspecting it, typically a pre-owned product. The product goes faulty, requiring repairs or scrapping. Therefore, you would not use “pig in a poke” to describe a good deal or a high-quality, functional product that comes with a warranty.

Acceptable Ways to Phrase Pig in a Poke

You can use “pig in a poke” in social and professional settings. However, it’s more colloquial slang and probably suits chatter among employees rather than management. You’ll use the phrase to describe how someone ripped you off in a deal for a pre-owned or new product. You failed to check the goods before accepting the deal, and you got the opposite of what you expected from the transaction.