Are you looking for a warning to give someone against their curiosity around a subject? This post unpacks the meaning and origin of “curiosity killed the cat.”

The saying “curiosity killed the cat” applies to situations where you’re trying to warn someone that their inquisitive behavior may result in bad events unfolding. The person may find themselves in a dangerous or life-threatening condition due to their actions.

Cats are naturally curious animals, and they often pay the price for their curiosity. For instance, sniffing a bee might result in it stinging them, or they may cut themselves while trying to get around a fence with exposed pieces of wire.

It can also mean it’s best to stick to staying out of other people’s affairs.

“Did you hear about George? He never came back from that dive to shark island. They searched for days but never found a body. I guess curiosity killed the cat and a great white got him.”

“She couldn’t help herself and had to go through his messages. Well, curiosity killed the cat, and she found out he’s talking to six other girls.”

“Curiosity killed the cat. I told Mike not to go through those accounts, but he did, and the boss fired him yesterday.”

“Don’t go in there; curiosity killed the cat, and you’ll be next if you see what’s on the other side of that door.” 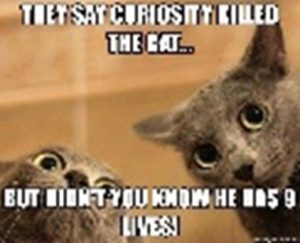 The origin of the expression “curiosity killed the cat” comes from the English playwright Ben Jonson and his play, “Every Man in His Humour,” in 1598.

“Helter skelter, hang sorrow, care’ll kill a Cat, up-tails all, and a Louse for the Hangman.”

The earliest version of the modern phrase appears in “The Galveston Daily News” in 1898.

The first citation of the standard version we use today appears in a Pennsylvania newspaper, “The Titusville Herald,” in December 1912.

“Curiosity killed the cat, but satisfaction brought it back.”

There is no evidence showing why the author of this version added “but satisfaction brought it back” to the expression. However, some experts believe that the addition comes from the saying that cats have nine lives.

Thus, cats being a curious animal and their need for satisfaction make it a catch-22 for the cat, as the animal’s nature will always get the better of its behavior.

Phrases Opposite to Curiosity Killed the Cat

Using the phrase to describe the killing of a cat due to its curious nature is not the phrase’s meaning. The saying has nothing to do with the actions of cats or animals, but rather human beings. It’s a way to warm someone that their curiosity could lead to a bad outcome.

You can use the phrase “curiosity killed the cat” when you’re trying to warn someone about looking too deeply into a situation. They may uncover something causing them to take action resulting in harm. The phrase suits professional and social use.

For instance, you could tell a co-worker to stop nosing around the books because the last accountant did that got fired. So, their snooping around could result in termination, and the saying ”curiosity killed the cat” would apply in this case.