Are you looking for the perfect way to insult someone with a gesture? You could “flip the bird” and extend your middle finger if so. This post unpacks the meaning and origin of the gesture and expression.

If you “flip the bird” to someone, you’re extending your middle finger while making a ball with the rest of the digits. It’s a common gesture made by people worldwide as an alternative to an explicit insult.

Typically, you’ll make the gesture out of anger or frustration at another person’s words or actions. You will “flip the bird” to someone when you verbalize the motion. Flipping the bird to another person will always get a rise out of them, and it’s likely to start an argument with the other party involved in the transgression.

Many people attribute “flipping the bird” and the use of the middle finger gesture as a way to tell someone to “F – off.” Be careful when using the motion, as you never know how the other person will react to it, and you could end up in trouble.

“Look at that guy over there. He’s weird. He decided to flip the bird on me for no reason when I looked at him. He must be mentally ill or something.”

“I decided to flip the bird to the guy in the other car after he jumped the traffic lights when they were on red.”

“Do me a favor and flip the bird to that moron over there; he almost caused an accident.”

“Flip the bird on me? What did I do wrong? It’s you that was at fault, but you’re so keen to pass the blame.”

“Flip the bird on me, will you? I’ll show you right now.” 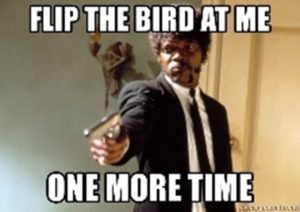 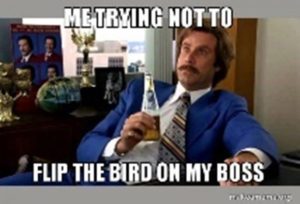 The origin of the expression “flip the bird” goes back to the late 1960s. The earliest appearance of the term in writing comes from the “Broadside” (Volume 6, Issues 17 to 26). However, the gesture of putting up your middle finger at someone telling you off extends back to Ancient Greece.

The use of the expression in its physical format is in texts dating back to Ancient Greece in 423 BC. Like today, the gesture was considered rude by this Ancient culture. It’s quite amazing that the motion is still in use today, and it has widespread meaning, understood by almost every culture around the globe.

Phrases Similar to Flip the Bird

Phrases Opposite to Flip the Bird

The expression “flip the bird” is the action of sticking your middle finger up at someone to tell them that you don’t care what they think or to show your annoyance at something they do. When you’re making the gesture, you don’t accompany it by telling someone you are flipping them the bird. You remain silent, make the gesture, and either wait for their response or move on.

You can use the saying, “flip the bird” when you’re describing the action of sticking your middle finger up in a rude gesture. You can say the expression when you’re talking about yourself or others. For instance, you could ask someone if you should flip the bird on that creep over there that flashed you. Or you could tell your friends that the creepy guy decided to flip the bird on you for no reason when you looked at him.