Did you just find out you were wrong about something? A friend could come up to you in the wake of the disclosure and tell you that it’s time to “eat crow.” What do they mean? This post unpacks everything you need to know about the meaning and origin of this expression.

If you have to “eat crow,” you’re not going to consume the bird. This expression means that you admit you’re wrong and humble in learning that you were not right about what you thought or a statement you made to others.

For instance, if you take a strong opinion stance on a matter, and someone proves you wrong, you would “eat crow” to show the other person that you acknowledge your mistake. It’s not a very common expression, as most people prefer to use the alternative saying, “to eat humble pie.” Both phrases have the same meaning.

“Oh great, it turns out I was completely wrong about that. When I get to work, the guys are going to make me eat crow.”

“I know when I’m wrong, and I have to eat crow. I’ll be more careful before settling on an opinion next time.”

“I was sure I was right, but now I’m going to have to eat crow.”

“Hey Jim, looks like you weren’t even close with your prediction. Are you ready to eat crow?” 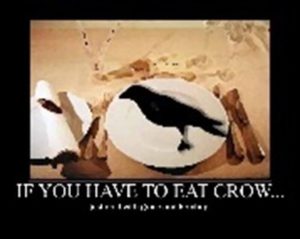 In the Christian religion, the crow is a bird unfit for eating. So, eating a crow is a distasteful act, garnering scorn from others that would find out about you eating the bird. The origin of “eat crow” comes from the era around the end of the Great War of 1812.

In this origin story, a US soldier crossed over enemy lines to hunt for food. He accidentally shot a crow during his trip, and a British soldier caught him in the act, forcing him to eat the bird. After taking a bite, the soldier managed to catch the Brit off-guard, wrestling back his gun from the soldier.

After retrieving his weapon, he would turn the tables on the other soldier, forcing him to take a bite of the crow as well.

Another possible origin for the phrase comes from the “San Francisco Daily Evening Picayune” in 1851, where a story describes a farmer tricked into eating the bird by his boarding guests. The guests complain about the farmer’s meals that he feeds them, and they decide to get him back by tricking him into eating a crow.

The farmer ate the animal with no issues, issuing the following statement about his experience.

“I kin eat a crow, but I be darned if I hanker after it.”

Phrases Opposite to Eat Crow

Some people may use the phrase to describe eating bad food, such as expired chicken wings. The term refers to making a mistake and owning up to it in the face of ridicule and has nothing to do with eating anything.

You can use the phrase “eat crow” when you’re trying to be humble to others after making an incorrect statement or when telling people that they should be humble after being proven wrong about a comment or fact they said to you. The phrase suits use in professional and social settings, but it’s not very common, as more people prefer to use phrases like “eat some humble pie.”