Did someone just tell you that you are “hoisted by your own petard?” What do they mean? This post unpacks everything you need to know about this idiomatic expression’s meaning, origin, and use.

The phrase “hoisted by your own petard” has the original meaning that an explosives expert will lift or “hoist” from the ground if they make a mistake and detonate the device while working on it.

A “petard” is a small explosive device. However, in the context of this saying, the “bomb” refers to your words or actions. So if you say something blatantly false or silly, and someone calls you out on it, you are to blame, and you would find yourself “hoisted by your own petard.”

The phrase also refers to an ironic reversal of events contrary to what you expect or poetic justice for your transgressions. The term could also mean that you sabotaged yourself with your actions or words.

“The embarrassment to your reputation was clear. Hoisted by your own petard, you made yourself look like a fool after contradicting yourself in front of the crowd.”

“Hoisted by your own petard, you slowly slink away from the crowd to avoid embarrassment after the other person called you out on your nonsense.”

“Do you really think that’s the right move? If you’re wrong, you’re going to end up hoisted by your own petard, and that could end your career. Are you sure it’s worth it?

“I’d be careful what you say if I were you, you’re going to put your foot in your mouth. There’s nothing you can do to backtrack your statements when hoisted by your own petard.” 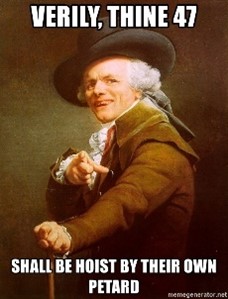 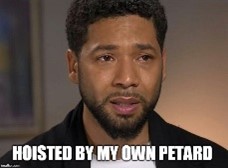 The origin of the phrase “hoisted by your own petard” comes from the Shakespeare play “Hamlet.” The term appears in a critical scene in the play where Hamlet discovers Claudius’s plot against his life, responding with the phrase “hoist with his own petard.”

There are several versions of the play, and the phrase only appears in the second quarto edition. Experts are unsure whether its use is indicative of the author’s intent or if the other versions of the play don’t use it due to playhouse practicalities.

The phrase appears in Act 3 Scene 4 as the following.

Whom I will trust as I will adders fanged,

They bear the mandate; they must sweep my way

And marshal me to knavery. Let it work,

For ’tis the sport to have the enginer

Hoist with his own petard; and ‘t shall go hard

Phrases Similar to Hoisted By Your Own Petard

Phrases Opposite to Hoisted By Your Own Petard

Ways People May Say Hoisted By Your Own Petard Incorrectly

Some people may confuse the words “petard” and “retard” and use the phrase incorrectly, changing its meaning. This phrase is not common, and most younger generations won’t understand what you mean.

Acceptable Ways to Phrase Hoisted By Your Own Petard

You can use “hoisted by your own petard” when you’re talking about someone’s plans failing, backfiring in their face. The phrase suits social and professional use when trying to say that the person made a fool of themselves. Usually, the person will feel rather sheepish after committing the action or offense and experiencing an outcome opposite to what they expect.