Are you looking for a way to ask someone to hurry up? If so, you could use the saying “chop chop.” This post unpacks the meaning and origin of this expression.

The meaning of the expression, “chop chop,” is to hurry up and be quick. The expression is somewhat archaic, and some people view it as a racist expression due to its origin. However, people say “chop chop” every day without a thought that they are saying anything racist.

If you’re waiting on your partner to finish getting ready for your date, you could tell them to hurry up and get ready, “chop chop.” You can use the phrase in social and professional situations. You could ask an employee to do a task as fast as possible, saying, “chop chop.”

“C’mon dear, you’ve been doing the makeup for the last 40-minutes, and the reservation was for five minutes ago. Let’s go, chop chop, we’re going to lose the booth if we don’t get there soon.”

“Alright, kids, the bus is down the street. Have you got everything? Chop chop, gather your stuff and get ready, or you’re going to miss it!”

“Okay, we’re ready to go; get your shoes Kevin, chop chop, or you’ll hold us up.”

“Sandra, get me that report before you go to lunch; I need it for the investors meeting, so chop chop, and make it happen.”

“Everyone gather around, chop chop, let’s get organized over here so we can get things underway.” 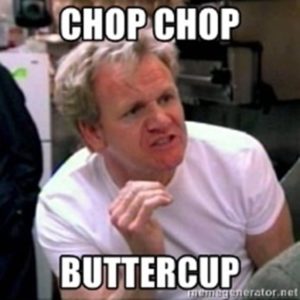 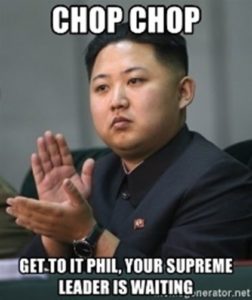 The origin of the phrase “chop chop” comes from the islands in the South China Sea. It’s the English adaptation of the Chinese expression, “k’wâi-k’wâi.” The earliest known use of the term in print goes back to the 19th century. The Canton Register would use the saying in a column on 13th May 1834, which appears as follows.

More extensive use of the expression appeared several years later in the monthly journal produced by American missionaries in Canton, also known as “The Chinese Repository.” A January 1836 article titled “Jargon Spoken in Canton” showed the expression in the following context.

British sailors were the first to adopt the use of the English version of the phrase, meaning quick or hurried. It’s thought it pertains to the actions on board the vessel or when loading it for travel. The use of the term dates back to at least the early part of the 16th century.

Phrases Opposite to Chop Chop

Some people may use “chop chop” as a racial slur against Asian people. This practice is rare nowadays, and most people will not tolerate racism in any manner, hence the dropping of its use in offensive language. Using the phrase to address someone about chopping items is also the incorrect use of the expression.

You can use the phrase “chop chop” when you’re trying to tell someone to hurry up. It could be when trying to get your kids moving in the morning, so they don’t miss the bus, or when telling your partner you need to hurry or you’ll be late for your dinner reservation.

The phrase means “hurry up,” and it serves to tell people that you’re anxious and ready to leave to start an activity. You could use it when going to the restaurant or leaving the restaurant. It’s a statement of urgency and suits social and professional conversations.