Are you caught between a rock and a hard place? If so, you could be in a “catch-22.” This post unpacks everything you need to know about the meaning and origin of this phrase.

Being stuck in a “catch-22” presents a paradox where you’re trying to escape, but the action of trying to escape prevents it from being possible. Since you need the outcome to complete the present action, there is no way out.

It’s a set of circumstances where one requirement is dependent on another, which relies on the first, making it impossible to carry out. You can think of it as a similar expression to “the chicken and egg situation,” “a vicious circle,” or a “lose-lose situation.”

“I have a real catch 22 here. The company says that I need work experience if I want a job there. How am I supposed to get experience if I need a job to get it, and no one will employ me?”

“Pilot’s deemed insane don’t have to fly. To be deemed insane, a pilot must request an evaluation. If pilots request evaluation, they must be sane. So, no pilot is ever insane. Therefore, they can’t get out of flying.”

“The printer at the office runs out of toner. However, you need to fill out and print a stationary request form to send to the supplier. How do you do that without a printer?”

“I took a survey to tell people about my need for more internet privacy.” 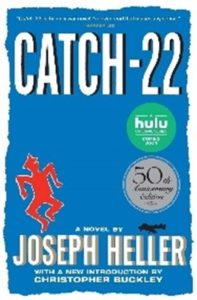 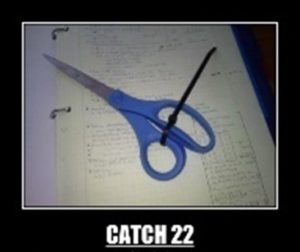 The origin of the expression “catch 22” comes from the title of the novel “Catch-22“,” written and published by Joseph Heller published in 1961. The book’s first chapter would appear in a magazine column in 1955 with the title “Catch-18.”

Chapter five of the book presents a paradox as the trap confining US Air Force members.

“Yossarian was moved very deeply by the absolute simplicity of this clause of Catch-22 and let out a respectful whistle.

‘It’s the best there is,’ Doc Daneeka agreed.”

The phrase caught on with social communications after the release of the movie adaptation of the book in 1970. Heller originally titled the book “Catch-18.” However, the publisher forced the change because of the previous release of the work, “Mila 18,” set in the WWII era providing too much similarity to the titles.

Phrases Opposite to Catch 22

The expression “catch 22” has nothing to do with catching anything or the number 22. Using the phrase to include anything relating to the number 22 is not the correct use of the phrase.

Likewise, the expression doesn’t have anything to do with the action of catching things. It’s a statement saying there is no way to practically resolve your problem.

You can use the expression “catch-22” when trying to describe a paradoxical situation where it’s impossible to come up with a solution.