Did you just finish a meal, and you’re looking for a way to tell everyone it’s time to go home? You could use the phrase “that’s all folks!” to signal the end of the evening. This post unpacks the meaning and origin of this phrase.

The meaning of the phrase “that’s all folks!” is to notify someone that they have reached the end of something. It could be the end of a meeting, meal, job, or anything that has a finite end to it.

You’ll use the phrase in social and professional situations to describe a shift coming to an end, or the end of a movie, signaling that it’s time to go home.

“With that, Bugs Bunny sank back into his burrow, gnawing on a carrot. The screen goes dark and pops up with the classic, “That’s All Folks!” Looney Tunes was the best kids cartoon show ever.”

“Time to go to bed, kids, turn off the TV and go brush your teeth; that’s all, folks.”

“Ok, that’s all, folks. Thanks for attending the meeting, and we’ll see you next week.”

“That’s all, folks, we’re finished for today, but I will see you tomorrow. Thank you, and goodnight.”

“It was weird watching that fish swim away; he got off the hook and sped off into the deep water; that’s all folks.” 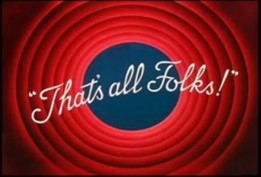 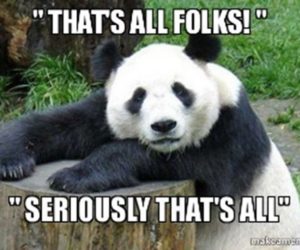 The origin of the phrase, “that’s all folks,” comes from the “Looney Tunes” cartoon series, which was popular with kids from the 1930s. The end of the cartoons would feature the character of “Porky Pig” bursting through a hole at the end of the episode and stuttering the words “That’s” before finishing with “all folks.”

The catchphrase became popular across the world in western countries. Many kids and adults saw the cartoons, and as the next generation became the parents, it was a common catchphrase in American and British households.

Many Warner Bros Looney Tunes characters would appear at the end of the show to say the tagline, but Porky remains the most memorable to people due to his stutter. Who can forget the legendary “Th-th-th-that’s all folks!’?”

Phrases Similar to That’s All Folks

Phrases Opposite to That’s All Folks

It would suit addressing a crowd to tell them that you sold out of an item people are queueing for. There are many applications for “that’s all folks,” but the idea is to use it to tell someone that something is over or finished.