Are you looking for a way to describe something that’s outlandish and on the fringe of what’s acceptable in society? You could say that it is “tongue in cheek.” This post unpacks everything you need to know about the meaning and origin of this idiomatic expression.

Being “tongue in cheek” means that you’re presenting something ironically or something that is borderline of what’s socially acceptable in modern culture.

For instance, comedians have a good way of making their jokes tongue in cheek about current events. They may make a thought-provoking presentation that leaves you wondering about the general narrative of something.

Typically, tongue-in-cheek behavior is on the borderline of getting away with it in the eyes of the audience or the people watching or listening to your behavior.

“That comedians joke about the political climate was pretty tongue in cheek. I wonder if the woke mob will cancel him for saying that?”

“That was a pretty tongue in cheek presentation, Deb; you got right down to the facts and made the board feel slightly uncomfortable, which is exactly what we wanted from it.”

“That was a tongue in cheek statement by the president. How does he expect to achieve that in the next 90-days?”

“The show is top-quality, tongue-in-cheek entertainment for teens and young adults looking for something different.” 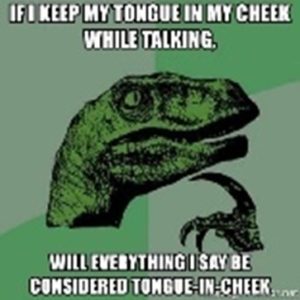 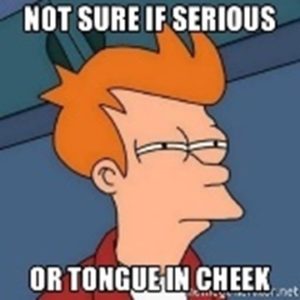 The origin of the expression “tongue in cheek” comes from the visual expression of placing your tongue into your cheek. Language experts think that the phrase originates from the reaction to hearing something that is on the fringe of what we find acceptable.

The expression first appeared in print in “The Fair Maid of Perth,” by Sir Walter Scott, 1828, where it reads as follows.

“The fellow who gave this all-hail thrust his tongue in his cheek to some scapegraces like himself.”

However, it’s important to note that language experts are unsure if Scott was using the phrase in a sarcastic connotation.

Tobias Smollett published “The Adventures of Roderick Random” in 1748. The story’s hero ends up in an altercation with a passenger where he says the following.

“I signified my contempt of him by thrusting my tongue in my cheek, which humbled him so much that he scarce swore another oath aloud during the whole journey.”

Richard Barham would later cite the expression in his 1845 work, “The Ingoldsby Legends.”

Phrases Similar to Tongue in Cheek

Phrases Opposite to Tongue in Cheek