Did someone just do something you find inappropriate in an attempt to gain recognition from their peers? If so, you could reply with “We are not amused,” to show you disdain. This post unpacks everything you need to know about the meaning and origin of this saying.

The phrase “we are not amused” is suitable for use in awkward situations where you want to show your disdain for the words or actions of others. It’s a saying implicating a sense of disgust at another person and that you can’t believe they would do or say that in front of you.

For instance, if someone were to say an inappropriate adult joke at a kid’s birthday party, the other adults would probably be more inclined to say, “we are not amused,” than laugh at the joke. The phrase shows a strong sentiment of discontent in the other persons or persons.

“So, you think you can come back at any time of night and get away with it? Well, young lady, we are not amused, and we’ll talk about this in the morning.”

“You might have thought it was a great idea to hide all the new prospects from us, but we caught on, and you’re in trouble. We are not amused.”

“This seems like nothing to you, but we are not amused. We’re going to have to take this to court to get justice for your actions.”

“Yes, you worked on it all day, and you put effort into it, but we are not amused. This is mediocre at best, and we’d prefer something else closer to our expectations.” 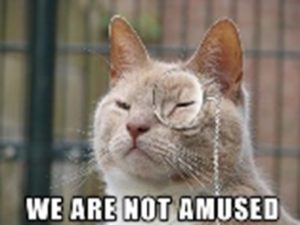 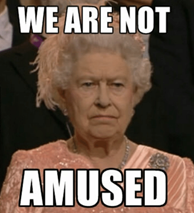 The origin of the expression “we are not amused” comes from Queen Victoria, who died in January 1901. The legend is that the Queen uttered the saying after hearing a rather risqué story from an equerry during a formal dinner at Windsor Castle.

Apparently, the Queen referred to “we” as the ladies in the room, not using it in the royal persona. The first use of it in print occurs in the “Notebooks of a Spinster Lady,” published by Holland in 1919, where the author states the Queen made the statement.

The publication of “Royal Girls and Royal Courts” by Mary Sherwood in 1837 also uses the phrase, where it appears as follows.

“Sitting low down the table, he [Helps] described the members of the household as chatting and laughing, when the Queen—looking grimly at them—remarked, ‘We are not amused!‘ which must have had a cooling effect.”

Phrases Similar to We are not Amused

Phrases Opposite to We are not Amused

Ways People May Say We are not Amused Incorrectly

Using the phrase to say that you want someone to amuse you is the incorrect use of the expression. With this idiomatic expression, you’re telling people that you’re not happy with their behavior. It has nothing to do with entertainment.

Acceptable Ways to Phrase We are not Amused

You can use “we are not amused” in several social and professional situations. At home, a parent could say it to their child when scolding them for bad behavior. Parents may say it between them if they show up late after work when the couple had plans.

Colleagues could say it between each other when they’re trying to show disdain for another’s behavior. There are many ways this phrase integrates with everyday situations; you probably hear it or use it yourself from time to time.