Are you looking for a word to describe an energetic young person? This post unpacks the meaning and origin of the word “whippersnapper.”

The expression “whippersnapper” refers to a young person, usually ten years or younger. Typically, seniors will use this phrase to describe young people with high energy that cause problems for them.

The word doesn’t have much use with the younger generations, but some parents may use it to describe high-energy kids at playgrounds or schools.

If you’re calling someone’s kid a whippersnapper, it means that they have an energetic temperament, and they like running around, or they appear engaging and bright.

“Look at that wee whippersnapper running around over there. Gladys, I wish we could go back to that time in life, if only for a moment.”

“That Clarkson boy is a real whippersnapper. He won’t sit still for a minute and refuses to go down for nap time in the afternoon like the other kids.”

“You’re a real whippersnapper kid. If you don’t calm down, I will have to find something for you to do. Go irritate your friends or something.”

“That kids a whippersnapper, all right. He’s one of the best pee wee players we’ve seen in this league for a long time.” 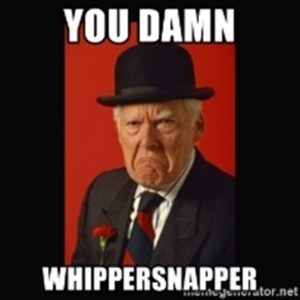 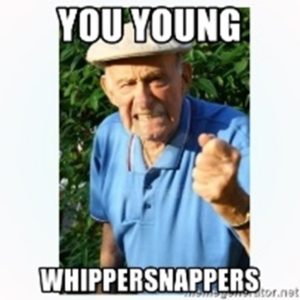 The earliest use of the saying in print comes from the English author Richard Head. His narration of the life of Francis Jackson’s highwayman, “Jackson’s Recantation,” in 1674.

“Have a care of Marlbrough Downs; there are a parcel of whipper Snappers have been very busie there of late.”

Jackson received the death penalty on trial, with the authorities hanging him in 1674, in Hampstead Heath, an area now known as “Gibbet Hill.”

Richard Head used “whipper snapper” to refer to the highwayman. However, experts believe Head used the term to refer to “street criminal.”

The saying would also appear some decades later in “A New Dictionary of the Terms Ancient and Modern of the Canting Crew,” published in 1699, as the following.

There is also some connection to the phrase “whipping boy.” However, there is no evidence to support the relationship between the words.

Phrases Opposite to Whippersnapper

Using the phrase “whippersnapper” to describe the effects of whiplash induced by traumatic injury is not the correct use of the expression. So, if your friend sustained a neck injury in a car accident, you wouldn’t call it a real “whippersnapper.” The phrase only suits social settings where you’re talking about energetic children.

You can use the phrase when referring to the exuberant, high-energy personality of a young person. Typically the term suits kids between the ages of three to seven years old as they learn to move their bodies and run around.

You could say the phrase to someone else’s child or your own, and you don’t have to know the child to make the statement. You could even call a high-energy child actor a “whippersnapper.” The high-energy behavior is usually innocent, but sometimes it can be erratic or destructive.