Are you struggling with a task at work? Maybe you’re feeling flat on the basketball court today? If someone notices your low energy, they might tell you to “Ponte las pilas.” What are they talking about? Don’t they know you don’t speak Spanish?

This post unpacks the meaning and origin of this idiomatic phrase. We’ll also look at ways you can use it in conversation.

“Ponte las pilas” is a Spanish term. The exact translation of the phrase is “put batteries in.” However, the term has nothing to do with batteries or electronics. You may also hear the phrase worded as “se pone las pilas,” which means “he or she puts batteries in.”

“Ponte las pilas” is an idiomatic phrase referring to a person’s energy levels. You’ll use the term when telling someone to keep going with what they are doing.

It’s a motivating phrase telling the person to overcome their low-energy levels and persist through to their goal. Other English equivalents maybe “don’t give up,” or “hang in there,” or “you can do it,” etc. Typically, it’s an encouraging phrase.

It also serves as a motivator when you’re asking someone to work harder or put more effort into the task at hand. It could serve as a motivating statement telling people to “get their act together” and place more effort and energy into their work.

The phrase suits use in several situations, from underperforming on the basketball court to failing to give your best effort at work or with a task.

Reg: “The boss is really overworking me at the moment, but I need that 13th check for the holidays.”

Richard: “I don’t know if I can finish the run; I’ve got a stitch coming on, I think.”

Noelene: “I don’t think I have what it takes to make it through this thing.”

Maggie: “Ponte las pilas, you can make it happen; just believe in yourself.” 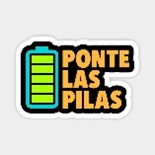 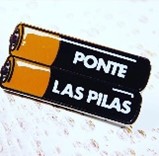 The phrase started appearing in memes in the early 2000s, and people continue to use it on forums and in gaming chats to tell other teammates or friends to hold on or hang in there.

Phrases Opposite to Ponte Las Pilas

Some people may use the phrase around non-Spanish speaking individuals who won’t know what you’re saying. It’s also important to note that the term doesn’t refer to batteries; it’s referring to your energy levels. Using it to describe how you need to charge your phone because of a flat battery would be the incorrect use of the phrase.