If someone just told you to “let that sink in,” what do they mean? This post unpacks the meaning and origin of this idiomatic saying.

Let that Sink In Meaning

The meaning of the idiomatic phrase, “let that sink in,” means to tell someone to think about what you or they say for a minute before reacting to the news. It’s a way to pause and think about a statement, situation, or action.

It’s a great way to tell people inadvertently; they need to think about what you are saying or what others are saying. You can use the phrase when talking to other people in social and professional conversations.

Let that Sink In Example Usage

Greg: “Did you see that Jeffery Epstein has a picture of Bill Clinton in a dress in his apartment. Can you imagine the dirt he must have on the guy, and he’s a former president?”

George: “Yeah, I had to take a minute and let that sink in; it’s an incredible fact.”

Kelly: “I heard that the government is closing all schools due to the pandemic. Now we’re going to have to stay home and tend to the kids.”

Sandra: “I had to step back and let that sink in for a few hours before I realized the next week is going to be really difficult.”

Mark: “Did you know that the Federal Reserve printed over 60% of all dollars in existence in 2020 and 2021? How is that going to affect us?”

Franny: “Let that sink in for a minute. What do you think it’s going to do to inflation?” 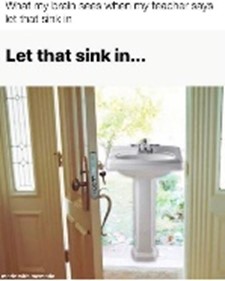 Let that Sink In Origin

The expression would shorten in the days of the Roman Empire, with the expression “let [it] sink in your hearts” being popular at the time.

The earliest known record of “let that sink in” appears in 1837. The text refers to the following before using the idiomatic phrase to emphasize that the reader should think about the statement.

“It appears, from the speech of the Leader of the Senate last night, that the only way in which the commission could supplement the work of the High Court would be in connexon with legislation which, while it might not infringe the provisions of the Constitution, might place one State at a disadvantage concerning another. Let that sink in.”

Phrases Similar to Let that Sink In

Phrases Opposite to Let that Sink In

Ways People May Say Let that Sink In Incorrectly

Some people may use the phrase in the literal context of the word. While there are several memes with a sink at a doorstep, that’s not the meaning or the correct use of the phrase. Typically, the term refers to a person thinking about what they or another person said or the consequences of their actions. It has a somewhat somber context in most conversations.

Acceptable Ways to Phrase Let that Sink In

You can use “let that sink in” in social and professional settings. The phrase has many applications, and you can use it for impressing an important point on someone or when remarking on a person’s actions or words. Typically, you’ll be using the phrase when you’re trying to emphasize that another person should think about what you or they are saying or the consequences of their actions.