Are you looking for a way to call someone a coward? This post unpacks the meaning and origin of the expression “yellow belly.”

The expression “yellow-belly” refers to someone displaying cowardice. The saying applies to people and animals.

For instance, your friends could be scared to take a dare, or your dog may appear hesitant to jump in the water. Both cases would be ideal for calling them a yellow belly to express your disgust at their cowardice.

Being a yellow-belly means that you are scared or ashamed at being unable to complete a task that takes you out of your comfort zone.

“C’mon Earl, we’re tired of your yellow belly attitude to breaking into other people’s property. We’re criminals, and that’s what we do.”

“That Michael is a real yellow belly piece of human garbage. He was too scared to go back into the house to save the kid, and if it weren’t for the heroic actions of the firefighter, he might not be survived.”

“There is no way I’m going to hang around a yellow belly character like that. I have my reputation to think about, and you can see he’s a snake in the grass.”

“C’mon, Nigel, stop being such a yellow belly and jump already; five of us did it, and we’re fine. Don’t chicken out now.” 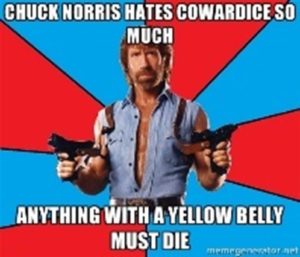 The origin of the saying “yellow-belly” comes from late 18th century England where it was a derogatory nickname used to describe a person born in the “fens” or into poverty.

The phrase appears in print in Grose’s “A Provincial Glossary: with a collection of local proverbs, and popular superstitions,” published in 1787, where it appears as follows.

“Yellow bellies. This is an appellation given to persons born in the Fens, who, it is jocularly said, have yellow bellies, like their eels.”

The English directory, “A General Dictionary of Provincialisms,” written by William Holloway and published in 1839, has the phrase as follows.

“Yellow-belly, A person born in the Fens of Lincolnshire (From the yellow, sickly complexion of persons residing in marshy situations).”

The first use of the expression in America goes back to an account of a military engagement in Texas, in “The Wisconsin Enquirer,” published in April 1842, where it appears as follows.

“Godsend that they may bayonet every “yellow-belly” in the Mexican army.”

While the phrase had an initial derogatory meaning, it changed to an expression of cowardice in the late 1800s.

Phrases Opposite to Yellow Belly

Yellow belly has nothing to do with someone’s skin color. While there is a connection to the phrase being a description of a Latin-American skin tone, that is not the current context of the expression for hundreds of years. Therefore, using the term to describe anything but cowardice is the improper use of the expression.

You can say someone is yellow belly with a serious, threatening tone or in a humorous one. The expression means a person displaying cowardice in any circumstance, from soldiers’ fear of going onto the battlefield in war to refusing to do a simple stunt as part of a dare set by kids.