Did you forget your phone at home? If so, you could exclaim, “fiddlesticks,” at your inability to remember something so simple. This post unpacks the meaning and origin of this expression.

The word “fiddlesticks” has two meanings. First, it’s an exclamation of surprise at someone or something disappointing you. Instead of swearing or using profane language, you can utter something harmless like fiddlesticks to voice your concern.

For instance, if you suddenly remember that you were supposed to go to the post office this morning, you could say “fiddlesticks!” to show your disappointment at your failing memory. It’s a way of exclaiming self-disapproval in a moment of surprise.

“Fiddlesticks” also acts as a way to tell people to stop talking nonsense. If they are making claims that sound unreasonable, you could say to them that they are talking fiddlesticks, and they should shut up and go away.

Fiddlesticks makes for a more kid-friendly way of cussing, especially when you’re around youngsters. If someone hears you using “fiddlesticks” to complain, they are unlikely to scold you for using the term in front of kids.

“Oh fiddlesticks, Jimmy told me if it started raining, he’s calling off the game. I think I felt a raindrop right now.”

“Oh fiddlesticks, I think I left my raincoat at home; it’s not in the car.”

“Oh fiddlesticks, I just realized I didn’t take anything out of the freezer for dinner.”

“Fiddlesticks, did we remember to get that guy a dollar for watching the car?”

“Fiddlesticks, that was the worst movie ever; I can’t believe we had to pay to watch that.”

“Fiddlesticks, I forget to put salt and butter on the popcorn; I’ll be right back.” 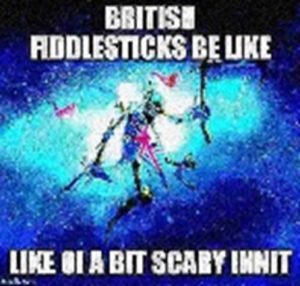 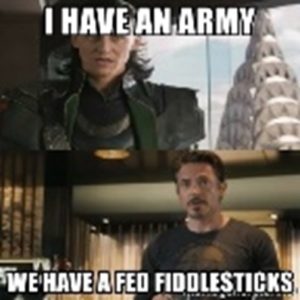 The word “fiddlesticks” originates from the bow used to play the violin. These bows are known as “fiddlesticks.” In 15th century England, the word’s original spelling was “fydylstyks.” Sometime in the 17th century, the term evolved to describe absurdity.

Thomas Nashe saw the first use of it in print in his play “Summer’s Last Will and Testament,” in 1600, where it appears as follows.

“A fiddlestick! ne’re tell me I am full of words.”

However, as the word’s meaning evolved, it changed from meaning something nonsensical to more of a reactionary statement when something does not go as planned. It’s a very similar word to the pop-culture term, “Jinkies,” used by Thelma’s character on the kid’s show, “Scooby-doo.”

Phrases Opposite to Fiddlesticks

Using the phrase to describe a reaction to a serious event, like a family member passing, would be incorrect. For instance, if your grandma dies and doesn’t leave you anything in her will, saying “fiddlesticks” in response to the news would be in bad taste. It’s probably the reason why she left you out of the will in the first place.

You can use “fiddlesticks” as an exclamation of disappointed surprise at an outcome. For instance, if you find out your favorite TV show got canceled, you could say fiddlesticks as a statement of your reaction of surprise and disappointment. You could also use the phrase if the rain decides to cancel your baseball game in the afternoon.

The phrase also suits calling people out on a nonsense claim or statement. For instance, it replaces the need for saying, “that’s rubbish,” or “that’s nonsense.” The phrase discounts what the person says or their promises, letting them know you are on to them.