Are you in the chat or playing a game online and feeling nervous about your position? If so, you could type “MonkaS” into the chat or spam it with the “MonkaS” emote if you’re on Twitch. This post unpacks everything you need to know about the origin and meaning of this meme.

The emote or meme featuring Pepe the Frog and the caption, “MonkaS,” suits situations online where you’re feeling anxious, nervous, or scared. It’s a way of letting people know that you are terrified of an engagement. The phrase also has sarcastic use, as in, “oooh, I’m sooo scared.”

The phrase can also apply to feelings of confusion, where you feel like you don’t know what to do. You’ll feel like you have to express your perplexity and anxiety to the rest of the chat or the subreddit.

Chat 1: “Look, dude, leave me alone; there’s no reason for you to keep fragging me in the game. Don’t you have better things to do?”

Chat 1: “I don’t mean to sound like a chicken, but I’m not sure what’s going on right now in the chat.” 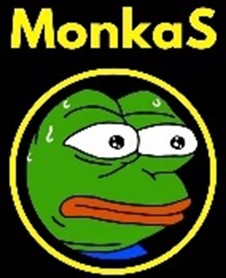 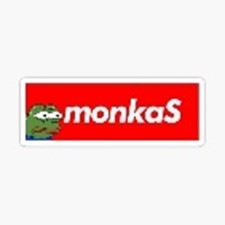 The word “MonkaS” originates from the many iterations of the cartoon meme, “Pepe the Frog,” created by cartoonist Matt Furie in 2005. There are dozens of Pepe the Frog memes, and they are useful in expressing what is going through people’s minds and their emotions. The “MonkaS” meme of Pepe the Frog shows him sweating profusely.

The first use of the MonkaS meme appeared on the internet chat site 4Chan in 2011. The meme was a success, with many users posting it to describe a situation causing anxiety, nervousness, or fear. The original design of the meme did not have any caption, just a picture of Pepe sweating bullets.

Some years later, in 2016, the MonkaS emote would appear on Twitch as an emote uploaded by user Monkasen, known as MonkaSenpai at the time. The uploader would add the words “MonkaS” to the emote, and it stuck. The official meaning of the emote is “MonkaScared.”

In 2018, the FrankerFaceZ Twitch extension added the emote to its collection, and it started gaining traction on the streaming site, Twitch. The meme and emote would enter mainstream use after the popular streamer “Forsen” started using it on his community page.

His followers quickly adopted the meme and emote, spamming it everywhere they could on Twitch and various subreddits.

Phrases Opposite to MonkaS

The MonkaS meme only suits use online and not in verbal communications. Some people may confuse the meaning of the mem, posting it in the wrong context online. For example, using the meme to describe happiness or any other emotion except fear or anxiety (or the sarcastic use of the phrase to express these emotions) is the incorrect use of the meme.

You can use the word “MonkaS” on online platforms like Twitch. If someone is out to get you on the platform or in a game, you could post the MonkaS meme to show them you’re afraid of the outcome of the engagement. The word and meme also suit ironic use, and you could post the emote or meme if you’re trying to tease someone online and tell them that you’re not scared of what they have to say.