Are you looking for a way to tell someone that karma will catch up with them? This post unpacks the meaning and origin of the proverbial expression, “just deserts.”

The meaning of the expression “just deserts” is to insinuate that you hope the other person gets what they deserve. Usually, you’ll use the phrase in a negative connotation, hoping that the subject of the term receives a punishment of some sort.

However, there are occasions where you can use it as a blessing, wishing that a person receives good fortune for helping you or another person with something. However, in most cases, it refers to punishment or retribution.

The phrase has a similar meaning to the expression, “karma is a bit*h” or “what goes around comes around.” Meaning that the universe rewards people with the same treatment they display to others. As a result, saying that someone should get their “just desert” means that you’re hoping they end up experiencing justice for their transgressions.

“The supervisor got suspended last night after the board found out he was skimming the payroll. He finally got his just deserts.”

“I can’t wait for Jimmy to get his just deserts for doing that to Calvin. When he gets to the principal’s office, he’s getting expelled for sure.”

“Those divers got their just deserts for taking that Goliath grouper off the reef. That shark ripped it to pieces before they could bring it up to the boat.”

“That criminal got his just deserts for robbing the local grocery store. The judge gave him 20-years like he was handing out free candy.”

“Keep working hard, and you’ll receive your just deserts. It’s only a matter of time before someone notices your effort.” 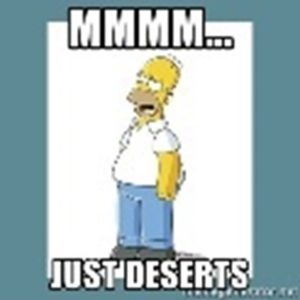 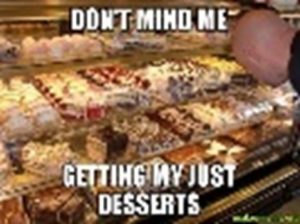 The expression “just deserts” originates from 13th century England. Specifically, language experts believe the phrase showed up somewhere between 1275 to 1325, originating from the Old French, “deserte.”

It’s common for people to confuse the words “desert” and “dessert” when using the expression, and today, more people think of the desert as a dessert, not the original meaning of the word.

One of the earliest citations of the expression comes from the Nicholas Udall translation of “Erasmus’ The first tome,” where it appears as follows.

“It procedeth more of their enuie, of their unquietnes of minde… then of any faute or just deserte in Erasmus.”

Phrases Opposite to Just Deserts

However, many people pronounce the expression using “desserts” and think that this word is the correct one for the phrase. However, “deserts” is the right word for the term, meaning the hardship a person would have to endure being cast out into the desert.

The phrase describes any condition where other sayings like “karma” and “cummuppins” apply. It’s a way of saying that the universe will put things into balance, and the person will eventually regret their actions.