Are you looking for a way to describe a sham legal proceeding? You could use the term “kangaroo court” to voice concern over the proceedings. This post unpacks the meaning and origin of this expression.

A “kangaroo court” is an unofficial proceeding set up to give the defendant a false sense of justice. However, the proceedings are biased and just for show, with the outcome predetermined by the authority hosting the kangaroo court.

The term kangaroo court would imply to the defense’s side, as the prosecution would see themselves as a legitimate authority. Some people will use the expression to define unfair legal proceedings in traditional justice systems.

The expression can also mean a judicial system set up outside of the official court system to expedite convictions, such as after a mass riot with thousands of people arrested.

“You can’t put me on trial; you aren’t a legally appointed judge. This is all just some kangaroo court to get me to admit to something I didn’t do, shame on you all.”

“This trial on TV is turning into a real kangaroo court. You can clearly see the judge is against the defense and biased toward the prosecution. This is not what justice looks like, I’m afraid.”

“We’ll take him out into the desert and have a kangaroo court. When we find him guilty, we’ll bury him out there.”

“This isn’t real justice; this is a kangaroo court. It’s like tribal law still exists out there, and the people want it.” 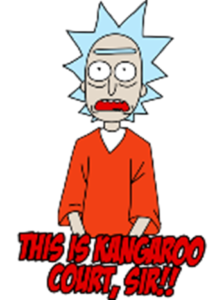 No one knows the origin of the expression “kangaroo court.” However, since the saying mentions the world’s largest marsupial, the kangaroo, we assume it must have Australian heritage. The English would use Australia as a prison colony during the days of its empire.

As a result, Australia was a land of outlaws and no governing body to manage the prisoners. As a result, the prisoners would form an independent judicial system, often highly rigged in someone’s favor. As a result, it was impossible for the prisoner “on trial” to get justice, forming the expression “kangaroo court” to define the proceedings.

The earliest appearance of the word in print goes back to a collection of magazine articles authored by Philip Paxton, published in 1853. They read as follows.

“By a unanimous vote, Judge G– was elected to the bench and the ‘Mestang’ or ‘Kangaroo Court’ regularly organized.”

Phrases Opposite to Kangaroo Court

The saying “kangaroo court” has nothing to do with kangaroos. It’s a way of saying that the authority rigged the outcome of the proceedings against you, and a jury with no authority wants to convict you for something you didn’t do.

Using the phrase to describe traditional judicial proceedings in developed, democratic nations is the incorrect use of the phrase. However, some people may use the term to express their feeling about the court case not going their way. Or a biased judge or jury affecting the legal process.

You can use the phrase “kangaroo court” to describe any form of hearing where you aren’t receiving fair representation or a rigged outcome against you. Usually, a kangaroo court is a self-imposed body outside the traditional justice system.

Therefore, you could use it to describe a group of friends ganging up on you or a one-sided disciplinary hearing at work. The use of kangaroo court is suitable for describing many social and professional proceedings.